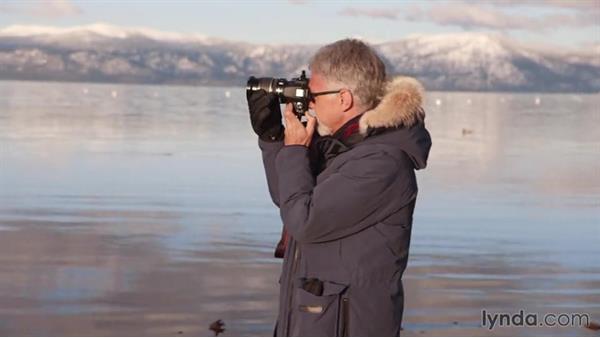 We called this "The Practicing Photographer" for a couple of reasons. There's almost kind of a, not a pun, but an entendre in there because to practice means to engage in the process of plying your craft, working your craft to get better at it. But there is also the practice of photography, which means photography as that activity. We wanted this series to be active things that you could go out and do, even the times when we're talking about a particular piece of gear, evaluating gear, understanding gear, those kinds of things.

Those are all parts of the practice of photography. You have to understand your tools. Knowing that bit is every bit as important as understanding a particular technique and a particular situation. (sound of motorcycle) Still, though, it's called "The Practicing Photographer," and a lotta times, we've give you assignments and asked you to go try things, and I've been thinking lately about the process of practicing photography. All disciplines face the problem of learning how to practice. A violinist practicing by themselves, even if they knock out a beautiful performance of something, they know it was just for them and that that was just practice.

Even if I go out and say, "I'm just doing an exercise today. I'm just practicing," I know somewhere in the back of my head that there's still a chance that I'm gonna find a killer shot, one that I could blow up big and really make into something. Because of that, there is always a certain kind of pressure that other disciplines don't have when they practice. I don't know that I have anything (laughs) to offer you in terms of how to deal with that pressure other than to just be aware of it. That it is okay to go out and shoot simply with the idea of practicing. There was an episode of "The Practicing Photographer" where we offered the idea of going out and shooting without a media card in your camera.

That was to try and ensure that you were staying in a practicing zone. So I would like to encourage you to either set aside specific shooting times when you are going out purely with the idea of practicing. Try to put out of your head the idea that maybe I'm gonna come back with a great shot. You don't have to come back with anything at all. I would also like to remind you, and I try to say this when I give you guys an assignment, I would like to remind you that if you go out with a particular exercise, it's just an exercise. If the exercise is to go photograph a play of light on the ground, that doesn't mean that you need to come back with great pictures of plays of light on the ground.

It means you're simply practicing the process of seeing that particular thing. Success in that moment means coming back with pictures of that thing, not coming back with great pictures. As we move forward into these next 100 episodes, I want you to, along the way, think about practice. Think about whether you really do it or not. Do you pressure yourself too much? One of the goals will be to try to find ways to come up with exercises that allow us to let ourselves off the hook. I think that is the biggest impediment to photographic practice, and we'll see if we can find anything to help that.