The reason we do site surveys 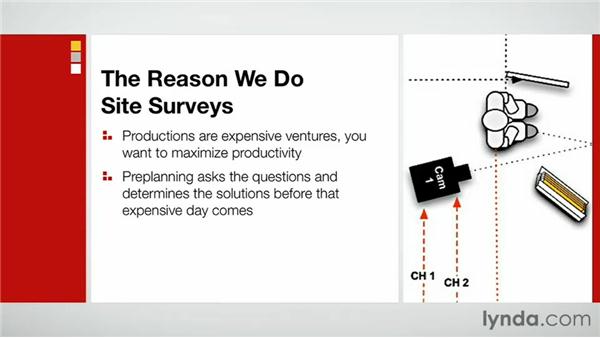 Join Richard Harrington for an in-depth discussion in this video The reason we do site surveys, part of Site Surveys for Video and Photo Projects.

One of the first things that get cut from the budget is the site survey. This is because clients think, well, why am I paying you to figure out how to do your job? Isn't that your responsibility? People often undermine the value of what it takes to go out there and just walk about, to take a look around, to make sure a location is going to work. Now, if I'm going back to location I've shot at before, I may cut the site survey. But even if the client is pressuring me to take it out of the budget, I still often go and do the site survey because it makes me look better.

When I get on location and I know where I'm shooting and where everything is at, I have a better shoot, and that's why we do a site survey. So, a couple of additional reasons if you need some thought or to give to your client or perhaps the executive producer who's controlling your budget. First off, remember, productions are expensive. You want to maximize the overall productivity. One of the things I often say is, do you want me to go out with a plan or do you want me to go out with the crew who stands around and waits while I figure it out? Fortunately, I have a lot of years of directing live television.

I'm generally pretty quick on my feet and can make decisions quickly without having to overthink. However, I make better decisions when I can go out, evaluate the location, and have a little bit more time to process. Additionally, the preplanning process will ask the questions and determine the solutions that you need before the expensive day comes about. This is just another way of saying that you want the time to go out, think about it, and determine the problems before you get there. It's a lot more expensive to have to stop a production and wait while you send the production assistant back to the office to get a piece of equipment, or while you're waiting for the grip house to run over additional gear that you need to pull off the next shot.

Remember, when you're paying crew by the hour you want all those hours to be actual production hours, not sitting around-and-waiting hours. Really, what happens here is you're taking the concept that's been on paper and you're putting a real-world face on it; you're taking that script, turning it into a shot list; you're taking that plan and turning it into a shoot schedule. Nobody loves paperwork, but the fact of the matter is, crews need it. You're going to want to go ahead and take that shoot and break it down into the essentials, making sure you have a shot list, making sure you have your call sheet, that you know all the locations in advance.

I also try to make sure that I get things like reference photos to help speed the process up. Now, we're going to explore some of these specifics coming up shortly, but just realize most people will try to pressure you to cut the location scout or the site survey. Don't. Even if it means you have to do it at your own expense, go do it. Because the difference between an effective shoot and an ineffective one almost always comes down to the fact of, did you go out and look at it before you went and shot there?

2/12/2013
When you have a video or photo shoot to do, how do you choose your location? In this course, discover how to carefully select sites and accurately plan for your shoot. Creative pro Rich Harrington teaches the key principles and techniques for finding a location for your next video project, while mitigating risk and reducing costs for a production. Rich introduces topics like logistics, shot blocking, important iPad apps and other measurement tools for surveys, and most importantly, the creative goals of a site survey.

This course was created and produced by Rich Harrington. We are honored to host this content in our library.
Topics include:

Video: The reason we do site surveys