Reviewing the shoot and the shots 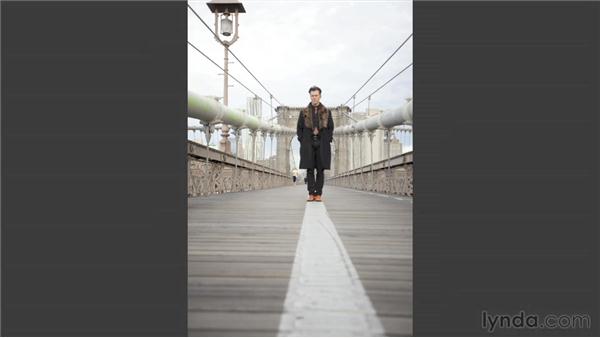 Remember that photograph? That's all about breaking the ice. And I like this one. Now technically speaking, it isn't perfect. Many people will tell you the near eye should be in focus. Whenever you're creating a portrait, the eye closest to the camera needs to be in focus. It isn't. The eye that's the further eye, the farthest eye from the camera, is. But I like the image. I like the expression and the moment. Here's another photograph. Once again, technically it isn't perfect. The focus is off, but I like that.

So often we're drawn to technique. The technique has to be perfect. But at the end of the day, sometimes I believe expression or emotion is more important than technique. So here I am trying to work within this context, trying to create different types of images. I'm looking for those photographs that are pauses between the conversation. The photographs that are silent. Those that aren't reflecting the chaos of that initial moment, the meet and the greet, rather the silence or the break between the notes.

Now here again, I'm getting close. I know that I also need to step back at some point. I need to use that wide perspective where I show some of the bridge. Remember we're on the Brooklyn Bridge. I need to include that in the frame. So in this case, using a wide-angle lens, getting low, and I'm getting low to try to remove a lot of the clutter of the activity that's happening there on the bridge. The next thing that I know is that we need to move forward. We need to move towards that area where I really want to create some photographs.

To get there, we have to walk through this construction zone. So of course, we're going to take pictures along the way. And here is Jared in the middle of that construction zone. I've placed him there in the middle of the frame. And the picture is somewhat interesting. We have some interesting leading lines. he's in the center of the frame, the bridge, and the background, but it just kind of feels like a normal picture. I need to do something more here. I want it to be a little bit more about Jared. So in this case, I get close. The background now becomes textured. It's abstract.

The photograph is about him and who he is, not our location. I'm interested in the light, the catch light in his eyes. I like this one! It's a keeper for me. But of course, I need to keep working it. Let's step back a little bit. how else could I work with him in this context? Well, it could be in the center or I can move him off axis. Again, leading lines, kind of leading up to him. Whenever you see something like that through your lens, you get excited because you say there's something I could do here.

What if I kept working this? Maybe pushed him more off axis. Here though, perhaps, he's a little bit too short, too close to the center of the frame. Okay, keep going with it. It's that progression towards that last image. Out of the last few, this is my favorite. It's simple. As portrait photographers, we're often asking ourselves, how can we ssay more with less? How can we reduce and simplify and deepen? Well, here we are in the construction zone trying to do that. We're making our way to that final destination and we're getting closer and closer.

And as a photographer, I cannot wait to get where I really want to take pictures. So we made our way to that location and I created this image, and it's not very good. I don't know if you can tell but he is completely out of focus. And even more, it's hard to know how to view this image. Yes, there are some interesting leading lines,but there also are some tourists. Again, you don't really know how to take this one in. It's almost like too much is happening. So I knew that I needed to do something, and once again I decided to get close.

All of a sudden, the background becomes a little bit more of an abstraction, a little bit more faint. And I love his orange shoes right there on the line at the base of the frame. Now whenever you capture an image like this or you see it through your lens, you ask yourself, what else can I do here? Here's another image taken just moments later. There's a little bit more eye contact, and in postproduction, I cropped it to a square. There's something that happens in an interesting way when you make that change from a rectangle to a square.

Let me show you the difference. Here is the rectangle. Here's a similar photograph, but now a square. Well, how else could we work with this? Converting it to black and white. Here is the vertical image in black and white. All of a sudden, it's really quiet. It's a silent photograph. What about cropping this now to a square? Again, a strong image. One of my goals on the Brooklyn Bridge was to create images that you didn't really know when they were captured.

Was it 20 years ago or was it yesterday? And many times we like to try to create photographs on camera, on location, and often times that's how an image is made. Sometimes, we use postproduction tools in order to further our vision, to express something in a different way. Again, that square or that rectangle makes such a difference. And here Jared is fitting within the frame, within the bridge. He's part of it. What would happen if he were taller than the bridge? All that I've done here is dropped my camera down to the ground.

Literally, I'm laying on the ground, looking up at him. I like that he is looking off to the distance. Now, he looks tall, he looks iconic. Imagine if his eye contact was at me, at the camera down. It might feel condescending, but rather, he's looking up and off. I like that! And there are images that we can make in these different contexts, sometimes that surprise us, like this one. And this image is about the juxtaposition of these two people, Jared and that stranger.

The background becomes textured. It becomes abstraction. This isn't so much about the Brooklyn Bridge as it is about that comparison, that contrast between these two people. And as we move forward, we then say what other types of photographs can we make? Another one where the background doesn't matter. Here I am really close. What would happen if I pulled back a little bit? And then maybe even a little bit more, opening up some more space, some breathing room. I like this! And I knew I needed to do more of it like with this photograph.

This is my favorite of those last few. Here he is over here on the right- hand side, out of the center of the frame. I love how the bridge leads towards him and there's a lot of negative or open space over here. When you go to a museum, museum walls aren't cluttered. Rather you see painting hanging on a wall with a lot of white space around it. That puts you at ease. It allows you to enjoy that piece of art. It allows you to take a deep breath and settle into it.

And the same thing goes for composing photographs. And here I think by having a little bit of negative space, it really draws our attention to who Jared is.

5/27/2011
In the Narrative Portraiture series, photographer and teacher Chris Orwig explores the use of elements such as location and natural light to create images that tell stories about their subjects and produce a strong emotional connection.

In this installment of the series, Chris shows how to incorporate aspects of a location, such as architecture, natural light, and even passersby, to create authentic, story-filled portraits.

The course begins with a photo shoot on the Brooklyn Bridge. Chris emphasizes the importance of directing and collaborating with a subject and of being responsive to changing lighting and location conditions. After the shoot, Chris discusses the preparation that goes into on-location shoots, from choosing camera gear to storyboarding. Next, he reviews the images from the shoot and mentions the post-processing techniques that he employed to make them more effective. The course also includes several assignments aimed at reinforcing the concepts Chris describes.

The course concludes with an on-location family portrait shoot and a look at the special considerations that go into group shots.
Topics include:

Video: Reviewing the shoot and the shots