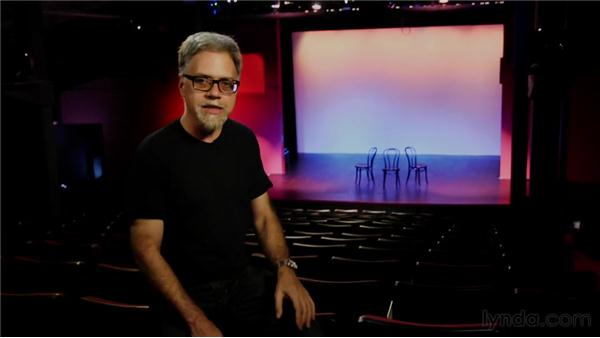 We are at the Bayfront Theater at Fort Mason in San Francisco, and tonight we are going to see and shoot a performance by Bay Area Theatresports, an improv company that's been working in San Francisco for over 25 years. We are here early because we have gone to the work of getting access to the company ahead of time. This is a really good thing to do if you need to shoot a performance, because, first of all, it allows you to get in the venue and check things out. I can see the size of the stage. I can see I have got poles here that are going to maybe make sightline problems. I can start thinking about where I might want to sit.

More importantly, I can maybe get permission to shoot some things that I wouldn't normally get to shoot in a performance, such as a rehearsal or sound check. Being able to shoot sound checks and rehearsals gives you a level of access that allows you to get shots that you are simply not going to get from a chair in the audience. For example, I will be able to move around the audience without--or move around the auditorium without disturbing the audience. I can maybe get up on stage if they allow me and get some angles that I certainly couldn't get from a chair here in the auditorium. Another reason to establish contact early is simply to be sure that you have permission to shoot.

You have probably been in performances already and had been told at the beginning, "no pictures" or "no flash pictures" or something like that. So before you shoot any type of performance, you need to get permission, and know that it's all always the company that can give you permission; sometimes it's the venue itself. It might be a union building that doesn't allow just any photographer to come in and shoot. We are going to talk next about some of the decisions that you want to make when you walk right into the auditorium, and whether those decisions happen because you have gotten access ahead of time or because you have had to walk in with the rest of the audience and quickly decide where to sit and what to do, doesn't matter, these are critical, strategic, tactical decisions that you have to make, and we will look at those in the next movie.

3/29/2012
Join photographer and teacher Ben Long as he describes the tools, creative options, and special considerations involved in shooting with a DSLR camera at night or in low-light conditions, such as sunset or candlelight. The course addresses exposure decisions such as choice of aperture and shutter speed and how they impact depth of field and the camera's ability to freeze motion.

Ben also shows how to obtain accurate color balance in tungsten and fluorescent lighting situations, and how to postprocess the images in Photoshop to remove noise caused by higher ISO settings. He also demonstrates accessories that can greatly expand your low-light photography options.
Topics include: