Breaking the ice with the initial shots 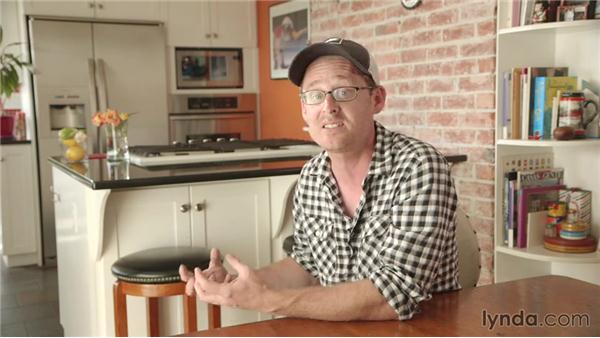 Since the pie had to be in the refrigerator for 10 minutes to chill before Tony could put it in the oven, I didn't want to waste that 10 minutes not photographing. So I asked Tony to go do some posed portraits with me. I put him on a stool in the corner of the store. I very quickly realized this location wasn't working for me. He looked too small in the frame and something just wasn't right. I ditched the idea of doing a portrait in this limited amount of time and decided to go do something else. I knew that I wanted to get some pictures of a finished pie.

I didn't know that he had any there or not, so I just asked him. And it turned out he had a key lime pie leftover from the day before. This is great, because it meant in this 10 minutes, I could really nail out some different shots, with an actual pie. And since we're doing a story on pie making, this is essential. And I was a little worried initially, because I thought if were only making one pie today, and only able to show one pie, it's not going to be that exciting for the viewer. So, we took the key lime pie and put it in different places. No, that doesn't make sense.

You wouldn't be sitting there, would you? >> No. >> Yeah, you'd be back here- >> What we'll do, right there. I'm really glad I had him put it in a box, for two reasons. First, his boxes are unique, they're a bright pink color. Photographically, that's great. Also, one thing I noticed with Tony early on, was that he kind of looked stoic when I was taking his picture. Because he's not used to having any camera on his face and he looked a little bit too serious. And this is about pies. It should be a happy photo. One of the tools that I use when working with a subject that's a little bit too stoic is I have them do an action.

So by asking Tony to put the pie in the box it, actually gave him something to do with his hands which made him stop thinking about my camera. Wait for me. Yeah go for it. Awesome, okay, I am going to have you open this up. So when he went behind the counter, I also made a conscious decision to stand in a place where I could see the cash register. This seems like a simple thing, but for me this is still a story about a small business owner. It's commerce. There's small little details that can be in your shots that helped tell that story.

Cool do you think it's been 10 minutes? >> I believe so. >> Cool. >> After photographing Tony, with the key lime pie and doing a couple actions around his face, before we knew it, it was time to pull the blueberry pie out of the freezer. Our ten minutes were up and it was time to put that in the oven. Before I actually put it in the oven, I realized the inside of the oven was a very unusual color temperature and exposure. So I actually had him open up the door, so I could get my exposure for the inside of the oven, before he put the pie in. because I wanted to get that action in one movement.

That's going in the oven, right? >> Yep. >> I'll just follow you. >> Alright. Yeah there you go, awesome. Perfect. Perfect. Cool. Thanks. >> You bet. >> Once Tony had the pie in the oven, and I had taken a couple of frames that I felt confident with. I knew that we were going to have roughly 50 minutes to wait for that pie to bake. This is great because now I can get down to the meat of this photo essay which is actually focusing on Tony, the owner of the business.

8/6/2014
Oftentimes when you're traveling, you stumble upon a gem of a place or a person who deserves to have a story told. But you can't spend a week or even a day shooting them. You're on the road. You've got an hour to take shots that convey something of the story, and then it's back behind the wheel. Or back on to the cruise ship. Or back to your family.

In this course, photojournalist Paul Taggart rises to the challenge and shoots a photo essay in only an hour. Shooting under time pressure is a common challenge for a photojournalist, and Paul describes the kinds of planning and shooting that gets results. Learn what kinds of shots you'll need for any type of photo essay, and learn how to engage and interact with subjects who you just met and might never see again.

Video: Breaking the ice with the initial shots