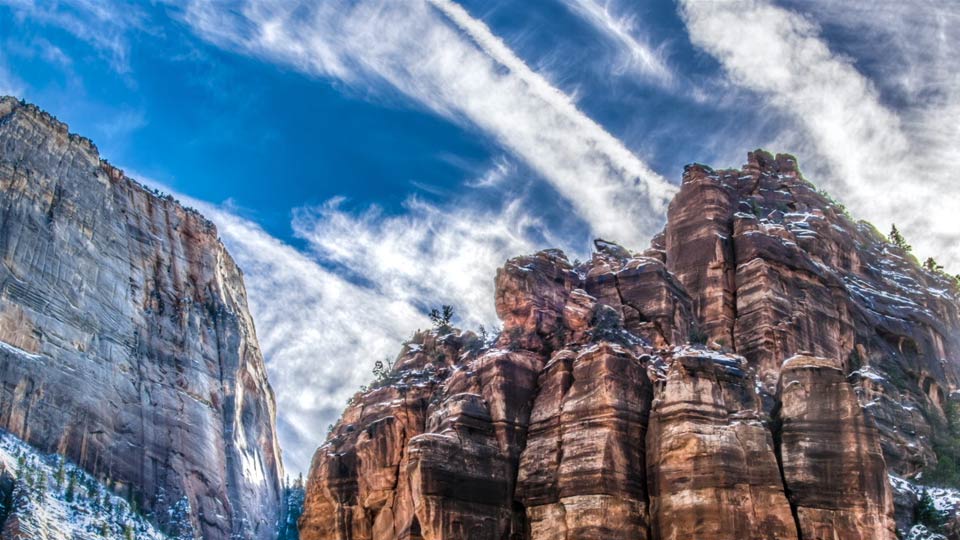 3/24/2014
Take a trip to Zion National Park to shoot an HDR time-lapse video, compliments of Rich Harrington and the crew at RHED Pixel. Watch as they show how to capture the sun as it moves across a rock face in this historic park and then enhance the natural beauty of the time-lapse sequence with dramatic HDR development and toning techniques. Along the way, Rich explains what gear you'll need to capture the scene and protect your camera from the elements, and how to set up your camera to shoot JPEG or RAW, create an in-camera HDR sequence, and add finishing touches in post-production programs like Photomatix Pro, After Effects, and Camera Raw.

This course was created and produced by RHED Pixel. We are honored to host this content in our library.
Topics include:

- Alright, at this point, I want to take control of the camera. Now, Nikons have built in intervalometers but I want more precise control so I can shoot in HDR. To do that, I'm going to use my iOS device and a CamRanger. Now, CamRanger is a remote control essentially a little Wi-Fi unit you attach to your camera and they make an app that runs on a couple of different platforms and desktop computers and it lets you take control of the camera to shoot time lapse and HDR. So my battery doesn't run out, I attach the battery pack here on the side with a tethering strap.

Make sure this batter pack is turned on and take my cable and plug in. Want to make sure that juice is getting to the unit so that the battery doesn't run out in the middle of a take. There we go. It's on. Very important that you maintain power. Alright, at this point, I've got power. I just need to connect to the CamRanger. Using the Wi-Fi, I simply select the CamRanger unit.

Now, you're going to want to follow CamRanger's instructions. Here's the highlights. Plug the unit in and connect to it once. That creates a pairing between the unit and the app then you need to connect to a Wi-Fi connection or an internet connection live data to register the app. I strongly strongly recommend you do this before you get out into nature where you may not have an internet connection. Test the gear before you leave. Once that's done, it's easy. You just connect to the CamRanger using a passcode that's on the unit that makes its own Wi-Fi network.

So I'm connected and now I can launch the app. Let's select that there. It launches and it starts a camera session. Alright, I'm going to make a new session start over and what I want to do is take control. Now, before we do any time lapse settings, I'll just do some test shots with HDR. If offers the ability to choose HDR and I could choose which property's going to change. Now, in this case, my camera is in absolute manual mode so I can control everything remotely.

Now in this case, because it's going to be getting darker, I think the underexposed image, the most underexposed image, is just a little bit too dark so I'm going to bring that up. Let's adjust the ISO here and I'll bump it up to ISO 500 and I'll adjust the shutter speed a little bit. So the base exposure has a slightly longer shutter speed. Let's try half a second and it's time to do another test. Let's hit Start.

Looks pretty good. I see more coverage in the shadows there, the highlights look pretty good. If I tap the image, it'll download it to my tablet which makes it so much easier to actually see what it looks like. In fact, you could double tap and check things like focus and the fine details. That absolutely worked. What I wanted there was for the underexposed image to properly show the highlights around 50 percent and for the brightest image, the most overexposed, the shadows still needed to be present with a value of a medium gray.

At this point, I think I have it. Now, the lighting levels are going to change so we'll talk about the interval shooting in a moment but all in all this feels pretty good and I think I'm ready to give it a shot.

Video: Controlling the camera with an advanced intervalometer