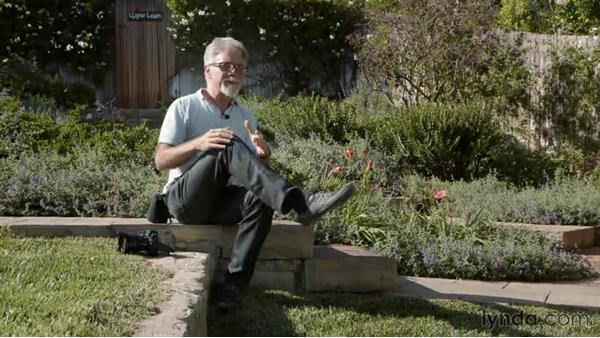 - Welcome to the solution for day two of the five day photo challenge. This is day two with bugs, still. I sent you out to shoot leading lines and I went to out to do the same thing, and I kind of put on what I think is my leading line secret weapon: I went out already with my ultra wide-angle lens on. I have a 10-24, which is the equivalent of a 16-35 on this camera, if we're talking about 35 millimeter equivalency. And what that gives me is really exaggerated geometry.

So, I'm thinking, with my wide-angle lens, lines are going to get much longer, and they're going to recede at much stronger angles and that's going to give me the ability to really exaggerate and make leading lines. At least, that was my plan. I happen to be in a place where there's lots of vegetation, so I don't have a lot of strong lines, so I was very glad when I walked through a gate and came to this manicured lawn with these walls and things, because right away I could see there were some lines. And I thought great, I've got lines coming to a point.

That's absolutely leading to something. So I went to the point and I stood there and I framed up the shot and then I had an incredibly boring picture. Granted, it had leading lines. The problem was, they didn't lead to anything. And very often, in any kind of shooting, you'll find locales that make great backgrounds if you only had a subject, and this was kind of where I was at. And that's when the moral dilemma arrived, because I looked over here and I saw these yellow flowers. And I thought, if I just ripped up those yellow flowers and put them right at the apex of this wall, these lines would be pointing to these beautiful yellow flowers.

Actually, I should probably say, that wasn't actually a moral dilemma, that was a fear of getting caught dilemma. I really had no moral problem with ripping up these flowers, I was just afraid someone would yell at me. So I gave up on that idea and moved on, and there were some more lines that I could work with with these walls, I found another composition, it was a little more complex. But again, same problem. The lines didn't lead anywhere. But I also realized this shot isn't my composition. This was the composition of whoever laid out this lawn. They've done the work already. So it was feeling like this isn't really a thing that I'm doing here.

And right about then, I turned around and I saw my shadow and something just clicked, now I know there's a subject. Now all I need to do are find ways of getting lines to lead to it, and so then it was just a process of lining up the shot and manipulating the shadow somewhat. That meant taking off bags or changing my posture or doing things. And as I continued to move around here, I found more places where my shadow was intercepting with lines, and so I was able to work things out that way. So, a big part of getting leading lines to work is they do need to lead to something, and I feel like I got really lucky in this case because it just happened to be that the sun was at a nice angle, that that could happen.

Something about this assignment that gets much more difficult as the sun goes down is that shadows get longer. So on the one hand, that makes it easier because now shadows can become lines. On the other hand, it gives you a whole other set of lines that are very often at odds with the lines that are casting those shadows. So, this is an assignment you're going to want to try at several different times of day because you're probably going to get very, very different results. In the end, I think this is the keeper image from today's assignment. So, get yours posted because I want to see your keeper images here from day two.

9/14/2015
How do you get better at photography? By challenging yourself every day. In this five-day photo challenge, Ben Long introduces five shooting techniques that, if you can master them, will lead to better compositions. Learn how to find good light, shoot with leading lines, frame a subject, "dirty up" your frame, and compose with black and white in mind—even when you're shooting in color. For each assignment, Ben offers his own solution, so you can see how a master photographer tackles the same challenge.