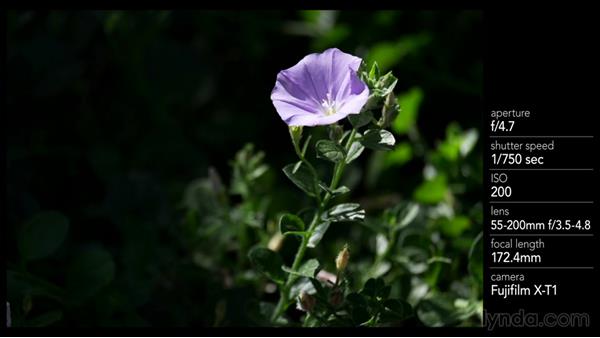 - All right, it's the end of a harrowing day one of the photo challenge, and here's the solution. All right, maybe it wasn't actually that harrowing, but it was possibly tricky, because I sent you out in a way somewhat vague, I said let the light be your guide to the good photos, go and look for good light, and that's such a broad thing. There's so many good things that constitute good light, depending on what you're wanting to shoot. If your idea was "well, I love portraiture, "I'm going to go shoot some portraits in good light," then you're looking for a very particular kind of light. So, what I tend to do, is just walk around, and let light catch my eye, and I'm definitely drawn to a certain type of light.

I like a real contrasty sort of light, and that can happen at lots of different scales. I also light light that yields a lot of texture and line and things. But, I was walking around in this garden area, and I was caught, surprisingly, by a very small area. The light was coming through some trees, on to some flowers, and it was just this tiny, little splash of light, that I could have easily walked passed, but for some reason it caught my eye. And, what caught my eye about it was, I knew that with the proper exposure, I was going to be able to have brightly lit flowers against a very dark background, and that's just inherently dramatic and a lot to work with.

So, I spent a lot of time, just with this tiny, tiny little patch of flowers. And, got a number of different things. I took a number of different approaches. I started actually with a very long lens, just because that's what happened to be on my camera, and immediately ran into a problem, I thought, boy, this is going to be great, I'm going to get in really close here, except I forgot that the minimum focusing distance on that lens is still pretty long. So, I wasn't as telephoto, I wasn't as macro as I thought I was going to be, I needed a real macro lens. But, still, I was able to get some nice shallow depth of field, and find some interesting compositions with that lens.

As you've hopefully heard me beat into you a lot, you've got to work your shots when you find a good subject. So, I tried a lot of different things. I tried moving around a lot. I also tried a lot of different lens'. Going from that extreme telephoto, I went the exact opposite direction and went really really wide, because it wasn't that I wanted to capture a wide vista, I wanted to stretch the geometry of the scene around, I knew that I could maybe make this tiny little patch look bigger, or at least look a little more ambiguous in it's scale, by going to a wide angle lens and getting in close.

Also, that lens has a pretty short minimum focusing distance, so I can really get in there. So, then it's basic composition 101, I'm just trying to figure out how to balance things in the frame, how to play with what the light's doing on different parts of the flower. I was shooting with pretty shallow depth of field, I was shooting pretty wide open. And, that's when I remembered, oh, I've got a 1.2, 56 millimeter lens in my bag, which is the equivalent of an 85 millimeter on this camera, so I thought, that's going to be great, I'm going to get this razor thin depth of field, and I put that on, and was back to the same problem I had with the telephoto, the minimum focusing distance on that lens is like a foot and a half.

So, I wasn't getting the super thin depth of field stuff, so I think it's going to be the wide angle bits that I like the most. This could very well have been a landscape situation that I came across, that's what's interesting about good light, it happens at every scale, and there are so many different things that define light as being good. The important thing is to keep your eyes open to it, and remember that very often, a photo is made by the light, not by the subject. I, honestly, would never have noticed these flowers if they were just in shade, it's the light that led me to the shot, and that's almost always how I work.

The important thing is when you find that good light, you've just got to beat it to death, until you come up with a good photo. That might mean a lot of lens changes like I was doing. So, post your solutions, I'm curious to see what you came up with when you went out hunting for good light.

9/14/2015
How do you get better at photography? By challenging yourself every day. In this five-day photo challenge, Ben Long introduces five shooting techniques that, if you can master them, will lead to better compositions. Learn how to find good light, shoot with leading lines, frame a subject, "dirty up" your frame, and compose with black and white in mind—even when you're shooting in color. For each assignment, Ben offers his own solution, so you can see how a master photographer tackles the same challenge.