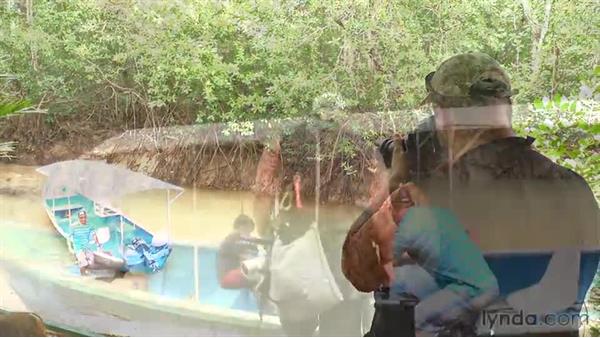 (tropical music) - The park itself has four beaches, and these are very photogenic. On the beach itself, it's a sandy beach, but parts of it can be quite rocky. One of the things I recommend that when you shoot on the beach you make sure you have safe, rugged, shoes so you're comfortable walking through. This could be a pair of rugged sandals with the toe tips covered that stay on, not flip-flops, but something that you can wear a lot like a reef pair of sandals that's designed to be used for kayaking or going canoeing.

You're going to want some sort of foot protection because as you're shooting, there are lots of things that you can get into, whether they be animals or the sand itself. Another thing I recommend is you bring a long lens to this park. Now, when you're shooting, you need a stable platform with that long lens. There were a ton of great animals to see in the park. I saw a bunch of sloths that were climbing the trees, both the two-toed and the three-toed sloth varieties, and if you are not on a stable platform, you're going to end up getting a lot of camera shake. Toucans, tons of other great stuff to see, but you need that stable platform to shoot from.

I also recommend that you pack pretty light for a few reasons. As we went to leave the park, there were times at high tide where areas that you would normally walk through become flooded, and some of these separate areas are suddenly now all connected by water. You'll find people with boats and flat-bottom boats offering rides and ferries. You may consider that or find yourself walking through waist deep water. So make sure if you're bringing equipment, it's light enough to either carry overhead, or you be mindful of where you're traveling.

Also, with this particular environment, one of the things that I've found is that theft is a big problem. You might be thinking theft from thieves. Well, we're not talking about humans. I'm talking about animals. The monkeys on the beach, mostly capuchin and some spider monkeys, like to steal stuff. They are so used to getting a free meal from tourists that if they see unattended bags, they will come over and try to take things, and they're not shy. I had bags directly in front of me or about a foot away, and they would walk right up and try to grab things.

So be very careful if you set your gear down, or it might get wandered off with and used by a monkey. Sounds funny until you lose your equipment. So keep your gear on your body. There is a wide range of animals on the location. By opening up your eyes and slowing down a bit, you'll see lots of them, particularly just off the edge of the trail. We found reptiles, snakes, insects, and tons of birds, as well as mammals, the monkeys and the sloths we talked about earlier.

This is a great place to go for animal watching. Now, there are lots of people. So stay with your group, and make sure if you're trying to catch an animal and get some great shots, don't get too far away from the group, but don't get too bunched up. If you're with a group that's making a lot of noise, you're less likely to see the animals. At the same time, don't wander off on your own and become separated, or you put yourself at risk. There are also tour guides available that come to the gates if you'd like to hire one, and they often do a good job of walking you through and pointing out key areas.