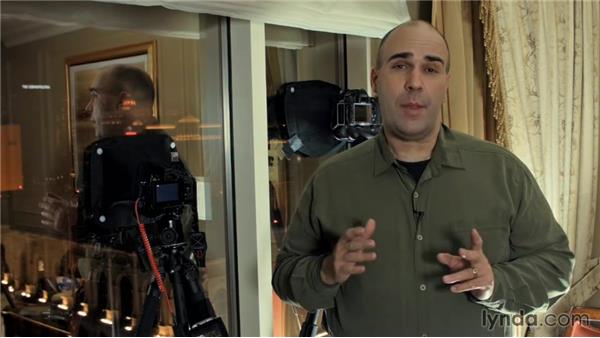 Join Richard Harrington for an in-depth discussion in this video The test sequence, part of Time-Lapse Video: Shooting From a Window.

A test sequence is pretty simple. All you're going to do is shoot a series of images and then play it back as a simulation. Your camera may have the ability to record a timelapse movie right inside. Now, sometimes when you do this, it's not going to save the raw files, it's just going to make the movie. Other cameras will do both. So make sure you get familiar with your camera settings. But for purposes of the test sequence, if your camera has a built in movie function absolutely use it.

Otherwise I'll show you an alternate method. Okay, we've got everything turned on and I'm going to use the intervalometer built into this camera for a moment. Let's just hit the Menu. And we'll come down here to Timelapse Settings > On. And everything's pretty much good from before. I decided to go with a shorter interval for now. We'll go with the 16 seconds we previously discussed. And then in Post, instead of using 30 frames a second, I'll just use 15 frames a second, which is easy to do.

That looks pretty good. Hit OK. And I am going to record the timelapse movie here, giving me an actual movie file I can play back. Alright, looks good. And I will simply hit OK. Let's make sure the time lapse is on. And now when I trigger the shot, it's in timelapse mode. Now I'm going to let this run for a few moments and when it's done, we'll check back the movie and if your camera doesn't have a movie setting, I'll show you two alternate strategies.

Alright, I've fired off a couple of minutes worth of shots. This is enough to get just an idea of what's happening. Let me show you two ways to check it back. For this camera if I hit the Menu button it's going to finish off the recording of that movie and there's a movie. And then you just hit the OK button or the Play button to play back the clip and you can watch it. If you don't have that, no big deal. Just go into Play mode, go past the movie clip, and then it's easy.

You can just hold down the button to step through the frames. And just go through and simply advance the frames. And in rapid succession you could start to play things back. And this will make it pretty easy to step through. Now, the camera is not going to keep up in real time. But you'll at least get an idea of what's happening as you play those frames back. Now in this particular case we're really getting set up for a morning timelapse. Pretty soon here I'm going to go to bed and I'm going to set the timelapse to try to capture the sunrise. I've got two cameras going so that'll work pretty well.

But as a test sequence this is just a way to check things back and see if it looks smooth. Now depending upon your scene, this may be easier to see than others, but just play it back, and of course if this doesn't work, no big deal. Pop out the memory card, jump into an application like Adobe Aftereffects and just import it and make an image sequence. Remember, that full length training title on timelapse, we've got a whole section on post-production. So before you call it good, it's always a good idea to check that test sequence.