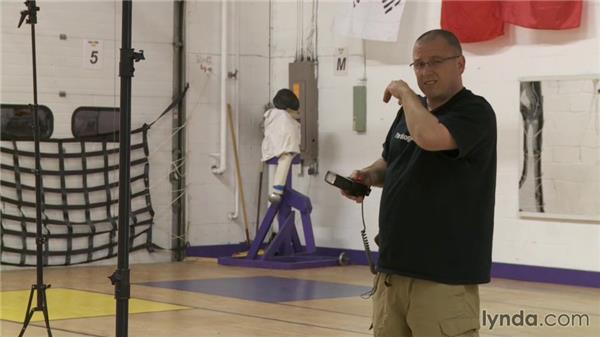 Okay, so, we've got a big white room with fluorescent lights. we're working way over the fluorescent lights. This is going to be a group shot of six or seven people, all wearing white in a white room but we want to amp it up and dial in the drama a little bit. So, I've got a Paul Buff boom holding a Softlighter. I think it's a Softlighter II, actually, and all it's got in it is one speed light set to quarter power. That's going to give me plenty of light for this group, because we're shooting it ISO 400. I could go the half or full power and get the depth of field, but what I would lose would be the ability to boom, boom, boom, shoot fast.

But this one only has a quarter CTO on it, so the flesh tones are going to be naturally warm but not, like, terribly warm. The fill is going to come off the floor. I don't think we need anything other than that. they're wearing white, so they're going to pick up that fill really well. And I'm going to set everything off with just one flash pointed up at the ceiling dialed in to, maybe a sixteenth power. So power levels right now, this is running at a quarter power. This is running at I want to say maybe 64th power? Let me check.

It was set to full power, we can turn it back on, I need to turn that down. So, we'll take that. That's on 1 32nd power and in the back, this is dialed down as far as it can go to 128th power, or so. I just need a little bit of color on that wall, which would have black without that flash. This is the one thing that I may need to adjust a little bit and that's what I'll do, so. When I look at the picture, 2, 0 looks best from this top light, this nice, bathing just falling down from the top light. And this is too bright. Once I adjust for this, I'll dial it up, or down, as needed. Alright, can I bring, can I bring you guys in, we'll do a quick test? And then we'll bring in our fencers.

Okay, so 16th power, everything gets set off fine. (SOUND). Now it looks very cool. There's no light happening back on that wall other than the flash it's hitting. So just a little bit of a glow wrapped around them and that glow is also going to give the the person in the center a little bit more of a center of interest. my rim light looks good. Lisa, I want you to turn to where your feet are almost facing. There you go, now, now wrap around and look towards me. face maybe towards that fencing post or an eye towards me. There we go.

(SOUND) Now that rim light works on your face a lot better so, so try that and we'll bring them in a couple of minutes. I think we will be good to go. If I, If I really want to get fancy with this, right now this light going up into this ceiling. If need more fill of the floor, I may actually turn the camera upside down and shoot at point this flash down towards the floor to make that one bunch come of the floor. I don't know I've needed that, if we do it's there 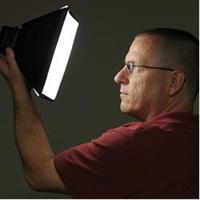 6/21/2013
In this installment of the Lighting with Flash series, photographer and Strobist.com publisher David Hobby demonstrates using strobes when shooting sports—in this case, some kids playing soccer. After providing an overview of his lighting strategy, David shoots some action shots of goalkeepers diving for the ball. Next, he shoots some portraits of the soccer players, employing a compact softbox attachment as a key light.

In the second half of the course, David photographs a group of fencers, transforming the bland lighting in a gym and freezing the athletes' action as they leap. Afterwards, he shoots a group portrait of the fencing club.
Topics include: