Working a shot with an old truck as a subject 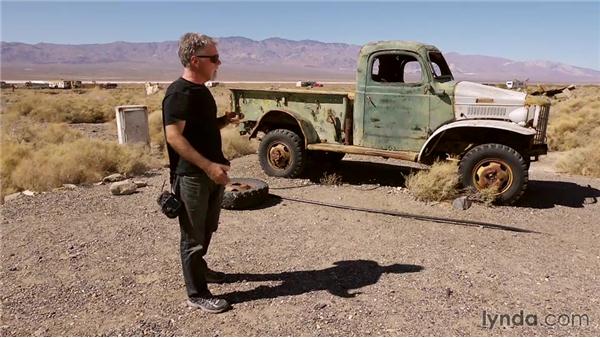 I've noticed before, really in any kind of shooting, not just landscape shooting. But I can get so preoccupied with trying to find the beautiful pictures that I don't actually always remember to just document where I am. And this is a great example. I can imagine myself getting home and telling a friend, wow there's this little town called Bowelrat and there's like nothing there, and all I'll have to show for it is see, here's a picture of a doorknob. Because I, that will have been the thing that I was really focusing on. So I'm going to remember to actually just take some boring vacation pictures while I'm here, also, so that I can bore my friends with them when I get home.

Just some basic what am I? where am I? What kind of stuff am I seeing? I just shot a panorama across the sprawling megalopolis of Balorat, here. I, again I've, I've noticed this before, that I get home and all I've got are these, you know, refined, fine art type photos and I, I forgot to just take pictures of what I was seeing and what I was doing, and so I really have to work hard to remember that. So, I'm going to try and do that here, as well as through the rest of this trip. This is a cool, old truck here, again, it's the middle of the day.

The truck's actually looking pretty good. But I know that later in the day, when the sun's more over there, a lot of things are going to start to happen to it. The colors are going to go must deeper. I'm going to see much more texture. I'm going to see a lot more color saturation. Thing is, I'm here now, and so, I can sometimes get trapped in my head and go, I shouldn't take this shot. The light's not perfect. The light's what it is, and I'm here right now. I'm not going to wait around 'til 4 o'clock. So, I should get what I can. I've got a lot of pictures of rusty old trucks, I don't need to work too hard on this.

I think instead what I'm going to do is think more about truck in relationship to the landscape. rather than focusing on the truck, because how much rusty metal do I need to shoot? I'm thinking more about the truck within the scene. This gets back to the question, again, of what is a landscape shot? So I, I'm right back to that problem. But again, that's not a problem that I worry that much about. I'm just going very simple, putting it in the middle of the frame, centering up the shot. Here's something. I think I could do better, though. Notice the relationship of this window to the driver's side window.

I think it would, might look a little better with just a little adjustment like this. A window is a very, very powerful compositional element. So you want to be careful about how you use them. And I don't know if you noticed that was really the difference between shooting here and shooting here. And that's a pretty big compositional change. Oh, boy. You know, as I get closer to the metal though, it's just so beautiful and rusty and, and. I don't think I can resist. I, I've gotta shoot. Some of this rusty metal. (SOUND) I'm not one to really spend a lot of time actually any time, researching the history of a place before I go into it.

I feel like it's something I should do more. I'm, I'm not proud of that fact, and one of the reasons that it's worth doing that, is. What may appear to just be a simple old truck, if you look into it, in this case it turns out, is rumored to have been Charles Manson's truck. Now. There's no conclusive evidence of that, but there's a lot of stories about it. If you Google Charles Manson's truck. You'll come up with this. I didn't know that, the first few times that I was here. I stumbled into that later somehow. again, there's no conclusive evidence. Even just the stories around it are interesting.

Why in the world would Charles Manson's truck be out here? Why would people think this is it. just a tiny little bit of even reading a Wikipedia entr entry can suddenly add a new dimension to the things that you're finding, so. Though I'm not that great about doing it. I really do recommend doing a little bit of reading on an area before you get into it (SOUND)

6/7/2013
Every type of location presents its own photographic challenges. For the stark wilderness of Death Valley National Park, these can include harsh desert light, stark landscapes, and a vastness that can be daunting to capture in a single frame. In this course, travel along with author, teacher, and photographer Ben Long to Death Valley to learn about the challenges and techniques behind capturing the exotic beauty and surprising details of the desert.
Topics include:

Video: Working a shot with an old truck as a subject