What is a lens? 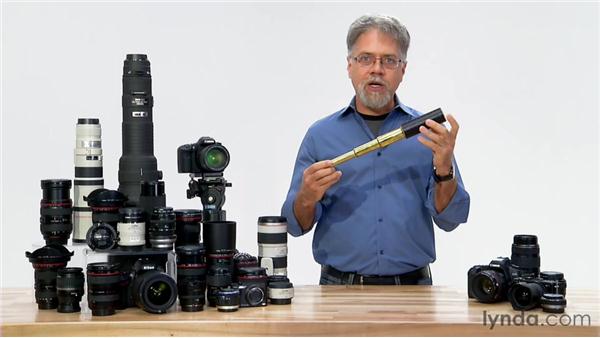 - We all know the law. Einstein spelled it out for us. Nothing is allowed to travel faster than light. And yet, every day, you manipulate the speed of light. Every time you use a lens, even the lenses in your eyes, you slow down light. Because lenses work by refracting, bending and slowing light to target it onto a particular area. In the case of your eye, you're eye's lens tries to target light onto the back of your eyeball. In the case of your camera, you camera's lens tries to target light onto the focal plane, where a piece of film, or a digital image sensor sits.

If the lens aims short of the target, or goes past the target, then the image will be out of focus. And, if the lens can't focus all wavelengths of light to the same point, remember, white light is composed of all other colors of light, then you may end up with colored fringes around some areas in your photo. At the simplest level, a lens is just a curved piece of glass. When it's curved on both sides, like this magnifying glass, the light goes in one side, gets bent and slowed, and comes out the other side a little larger, meaning that what you're looking at appears bigger. Other types of lenses might be curved on one side and flat on the other.

Some are curved inwards, those are concave, while others are curved outwards, those are convex. If you're far-sighted, and you wear reading glasses, then your glasses have bi-convex lenses, like this magnifying glass. That is, they're convex on both sides. They can make things up close appear in focus. These types of spectacles were invented way back in the Middle Ages. If you're near-sighted, like I am, then your glasses are concave on both sides, these are more complicated to engineer and those didn't come along until later. Eyeglasses though, or a magnifying glass, use a single lens, one piece of glass.

Things get far more interesting when you start combining lenses. On October 2nd, 1608, Hans Lippershey, from the Flemish province of Zealand, applied to the Hague for a patent on "a certain instrument for seeing far", and soon after that there were gobs of people making spyglasses. A typical spyglass has a weak convex lens at the far end, and a strong concave lens near the eye. Now these devices were constructed largely by trial and error. It was Gallileo who worked out the math behind the optics of multiple lenses, improved the simple spyglass to a practical telescope.

Now, similarly, your camera lens is not a single piece of glass. Instead, it's lots of lenses, lots of pieces of glass, sometimes a dozen or more. Each individual lens is called an element. Each element serves a particular optical function. And sometimes elements are cemented together into groups throughout the lens. A group serves a single optical function. Lens design is a process of trade-off and balance. So, for example, you might set out to design a lens with a particular magnification power.

And so you choose some elements that give you that amount of magnification. But maybe those elements yield an image with bad distortion. That is, lines on the edges of the frame are bent and curved. So you add another element behind that to correct the distortion. But then maybe that element introduces a bad lens flare, a bright reflection that washes out part of the image. So you add another element to correct that, and so on and so on. When you're lens shopping, you might see that a particular lens has 12 elements arranged in three groups, or something like that. If a salesman offers that to you as a selling point, you should definitely give a knowing nod to indicated that you've already worked out the maths of the optics in your head, and that you deeply understand the advantage of this construction.

But in the end the number of elements and groups should not be a buying concern, unless you're an optics nerd who has a technical curiosity to satisfy. Later, we're going to look at how to choose a lens, and internal construction is not going to be one of our big concerns. What does matter in your use of a lens is an understanding of focal length, aperture and focus. And we're going to study all of those in this course.

Video: What is a lens?