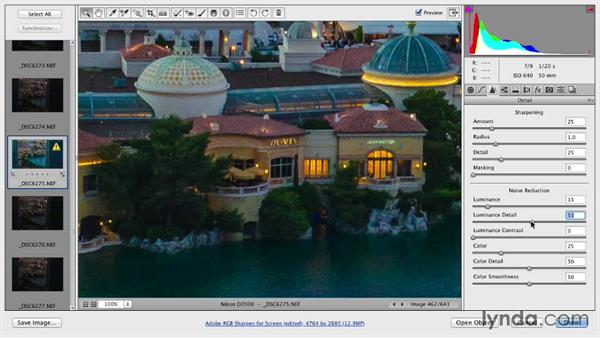 Join Richard Harrington for an in-depth discussion in this video Time-of-day change, part of Time-Lapse Video: Shooting From a Window.

You've already seen one change for time of day. Let's go the opposite direction. Instead of sunset to sunrise, let's start in the daylight, and see the scene get a bit darker. This is going to be a good chance to refresh how to handle those tough shots, when you're seeing, a major exposure change. And this one is a really cool shot. I've actually captured the fountains of a very famous hotel. And I like how it looks, and I want to show you the transition here, as we go from daytime, into the night. In this case, the picture looks pretty good.

If you go over time, you'll notice that it progressively gets darker and darker. And initially, we shot a bit overexposed, for the daytime. Now, as the evening progresses, the middle of the time is looking pretty good. But the reason why I shot a little bit more open, was to make sure that we had plenty of light in the censor. So as we get later and later, the shots still look pretty well exposed. Ideally here, we'll create an exposure that works, for both times of day.

Now, the issue is that you don't want to just go off of the first frame, and the last frame. In this case, the first frame, is way too dark, but if we expose for this frame, it's not going to look so good. So, let's pick a little bit earlier. We'll go partway up. If I was going to treat this as quarters, I'm going to go about one fourth of the way up this scroll bar, and use that as my basis image for adjusting. All right, that looks pretty good, let's do a straight forward adjustment here.

We'll start with an auto adjustment, that definitely exposed to bright, but we'll work this here. Pull down the Highlights a little bit, and lift the Shadows for a split exposure. And then back the overall Exposure off a bit. This is supposed to look like nighttime, so, let's not go too far. Looking at the horizon here, it's a little bit tricky. I'll take the straighten tool, and go off of one of my edges here, in order to straighten. Now, that looks pretty good, but that's more of a crop than I want.

So, let's see if we can't fix that. We'll change the crop here to 16 by 9. And let's adjust. Takes a little give and take, but, that's looking a lot better. And I'll press Return, and now the horizon line is fixed. Let's play with the Exposure just a bit here. And instead of getting the blacks with exposure, we'll bring the blacks back out with some Clarity, and the Blacks slider. By lifting the blacks up a bit, we can then take the overall Exposure back down, to get that proper balance.

All right. This is a rich, lush scene. So we'll go with vibrance, and pop the Saturation a bit. I really like how the blues are coming through. And let's try a Cloudy color balance. That's closer. Roll that a little bit more towards blue. And that's feeling, fairly accurate for the nighttime sky. I like that. This definitely feels like it's the early part of evening, and looking that through, pretty happy. Let's take advantage of Lens Correction here, and we'll invoke the Lens Profile Correction.

Now that was a minor adjustment, but it did pull out some of the issues at the edges of the frame. And let's just invoke a little additional correction there for Distortion. I'm looking at the right edge of the building here. I could turn on the Grid to make that a bit easier. And that looks pretty solid. Now, before you wonder about these two buildings, they're diagonally shaped. So, I can't use those as a straight edge, because the buildings themselves are not straight. They actually are built at diagonals, for the sides.

So, I need to rely on this hotel back there. That looks pretty good, let's just look that through a little bit. Zoom into 100% to check for noise. Not bad, pull the noise down just a bit, you could see that, that made a nice difference there while still preserving detail, and let's pull the luminance detail up a bit. Reduce the Color noise. And with the hand tool, we could check out a few different areas, looking for problems. All in all, I think that's working pretty well there.

All right, let's pull that back. I'm happy with that, so what I'm going to do is go over, to the Snapshots. Make a snapshot, and call this Night. Once I've saved a snapshot, it's a good idea to mark this image with stars, so it's easier to find later, in case you need to reference that across the board. I can now choose Select All, and Synchronize. Make sure you sync all of the settings, including the Crop, so that the images become unified.

Click OK, and those all become adjusted. And, once that goes across the range, let's just spot check some of the images from later in the mix. That looks pretty good. While it's definitely evening, I think we've got a good balance here of it feeling like nighttime, without going too dark. If you want to tweak it, you could of course use this as a basis, and come up with a third adjustment, but overall, I feel pretty good with that. With that done, I'll Select All of my images.

And choose Save Images and let's target a folder. These are the nighttime images, I'll select that folder. And we'll name this, Hotel Night. And have it make sure to use a four digit image sequence. Starting with 0001. Max quality JPEGS are fine here, I've applied the Rec 709 broadcast video Color Space. And I can click Save. Those images, are now processing. It's going to take a little bit of time for that to finish, but while it's running, I can go on to the next state.

Now, I mentioned earlier, that we made our basis of the adjustment, about one quarter up from the bottom. Now I'll go, one quarter from the top. And take a look at those images. Well, this is definitely the wrong color balance, and not a good exposure. Let's make a tweak. We'll select this and go back to an Auto value for a second. It's not bad. Switch to Custom, and let's dial that in. That feels pretty good for the color. The Exposure's definitely too bright, though. So I'm going to pull that back down.

And I like that, that's feeling pretty good. Let's play with the Shadows and Highlights a bit, and put a little more Contrast into that shot. Looks good. I'm going to tone down the Vibrance and Saturation here for the daytime, because that was boosted for night. Feels pretty good. The curve, not bad. Let's just pull down the Highlights a little bit more. And the Lights. And lift the Shadows and Darks just a bit, to smooth out that mid-tone.

All right, not too bad there. I feel good with the exposure, let's just put a little more Clarity in, and pull those Blacks back down a bit. All right, that, definitely looks good, for the daytime shot. To make things easier in the future, I also suggest, that you save the presets, with the first image. So, in this case, I made a snapshot for night. Once you make all the adjustments for the daytime, go ahead and store a day snapshot as well. Now, within that first image, you have the settings for day, and night.

This makes it very easy to Select All of the images, and Synchronize, there's my nighttime balance, or, there's my daytime balance. This makes it very quick to switch between your two development settings, when you need to make your exports. I've got the daytime set, and now, I could save those images as well. Save Images, Hotel Day, and let's just choose another folder.

There we go. Click Save, and those images are now running.