Spooling the film to prepare to develop 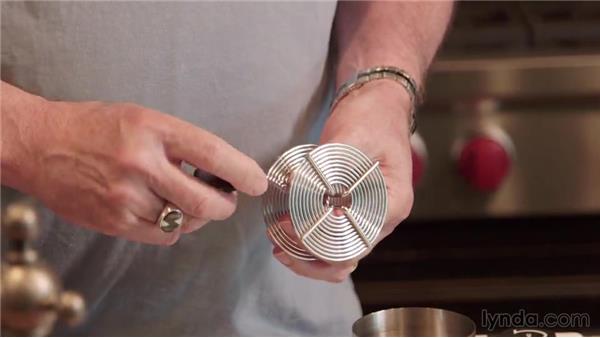 Join Konrad Eek for an in-depth discussion in this video Spooling the film to prepare to develop, part of Analog Photography: Shooting & Processing Black-and-White Film.

Now that we have an exposed roll of film, the next step to get it ready for the chemical process is to load it onto a spool, which will allow the chemicals to flow freely across the emulsion surface of the film while we run it through the process. When we purchased this canister and lid, it came with a spool as part of the kit. That spool holds the beginning or the leader end of the film in place with this little metal clip here, and the spiral part of it is a little bit lighter in weight than this particular spool.

I went ahead and purchased one of these I found over the years. This heavier duty spool that attaches to the film with a couple of pegs that grab onto the sprocket holes on the side of the 35 millimeter film to be much more durable and also much easier to load. One of the biggest challenges that I've found beginners have when they're doing this is actually getting the film properly on the spool. You look at the spool, it's a spiral that has a very definite starting space. And what you want to do is have the spiral of the film coming off of the top of the spool match the spiral over here going into the center of this spool.

It's like running a reel to reel tape or an old cassette tape. You, it works on the same principle. One spiral leads to the other. And if you do it properly, actually by feel, you'll realize you can tell just by the way the film feels and sounds that you're getting it on right. If you're hearing snap, crackle and pop, and it's not breakfast time, you know you're doing something wrong to your film. Okay? This little canister we've used is really, essentially, light-tight. I didn't talk about this a lot earlier. But the little place where the film came out has a couple of fabric strips that help keep this light-tight as you carry the film around outside.

That being said, it's best when you're done with your film, when you've wound it back into the canister, to drop it in, into one of the little plastic things to keep it sealed up and light-tight. The next step for us is we've got to get this out of the canister and onto the spool. That doesn't sound too hard until you consider the fact that you have to do that in complete darkness. Remember the film is orthochromatic. It's sensitive to all wavelengths of light, so there's really not even a safe light situation we can use that will allow us to do this with a little bit of visual control.

So this is something I'd suggest you practice with a, an extra roll of film. Maybe you've got an expired roll of film laying around that you can use for practice. Practice it several times before you try it with your real film because what we're going to do is first, we're going to open this canister. And notice on one end that there's a little spool and it sticks up. The other end is flat. And what we want to do is find the flat end. Use the opener and pop that end off. Once we've popped the end off, I'll slide the interior spool into my hand. Then I will find the leader, take my scissors, and very carefully cut that off square. Now you're thinking, okay, I'm in total darkness, I can't see what I'm doing and I've got sharp objects. What I do when I do that motion is I ground the base of the scissors against my fingertips. That's why I know exactly where they are and then when I make the cut I don't run any risk of getting myself any inopportune manicure. I'll then find the spool I'm going to use, check with my fingers to make sure the little, the little ridges that stick up to grab the sprockets are in the right position. And I'll stretch out a little bit of the film and just essentially lay it over and pull, and the sprockets literally grab the film. From there, with just the slightest bit of tension, I'll start winding the film onto the spool. One thing you'll notice too what's the, the balance of the film, I'm very carefully kind of keeping here in my hand so it doesn't come completely unspooled and I kind of have control of the entire situation. I'm not putting any lateral pressure on the film at all as I load it. I'm just slightly keeping my finger and my thumb on the outside of the spool to just gently bend the film so it'll, will fit within the two spiral wire components of the spool. And I'll just continue to spin this as the film winds off its original spool and onto the processing spool. If you feel a little crinkle, if it starts to feel a little off, you've probably gotten out of line.

Just back up, undo it, and go back forward. If you're doing this properly, it will feel almost effortless. Okay, when we get to the end here, we pick up our scissors again and here, I'll put them around and I'll ground them against the spool and make a cut and that frees the spool on the last of the film. And then I'll carefully lay that in, take the spool, drop it in the canister, place the lid on tightly and at that point, you're light-safe with a roll of film that's ready to process.

Okay. So you've seen me do this so you could see what I was doing. The next step is to get a light-safe environment. We'll take our spool, reopen the canister, and take our practice reel. This wasn't the film we spent hours getting brilliant images on. This was an un, unexposed roll that we just use for demonstration purposes. Also notice that this did not completely fill the spool. This spool is designed to hold a 36-frame roll, so when the 24-frame roll we use is fully loaded on the spool, there will be empty space.

I want you to know that so if you're shooting 24s, you don't panic when you get there. Once again, in the beginning stages, I recommend the 24-exposure rolls because they're easier to handle, it's less to get on the spool, it's much simpler in a lot of ways. So what I'm going to do is I'm going to take my canister, the lid, the spool, the scissors, and the opener. And I'm place those in the changing bag as long as the real film containing 24 brilliant exposures in our changing bag.

And it's a double wall setup here. So I'm going to zip up the first layer. You can see it's black and it's light-tight, but the zipper might pose some problems. And then I'm going to zip close the second layer, which is black on the inside and silver on the outside with the nice little flap that overlaps. Between the two, I've gotta a very good light-tight seal. The advantage of the silver is if you're working outdoors, it reflects the sunlight, so it reduces the heat. Then I'm going to take off my watch, particularly if you have one that's brightly luminous or possibly lights up.

Get your watch off because if your watch lit up while it was in the changing room, it would affect your film. Then I'm going to slide my hands into the bag and then repeat what I just showed you inside the confines of the changing bag. The part that I hate about this is my hands are scared of the dark.

Video: Spooling the film to prepare to develop