Shooting black and white in a vineyard 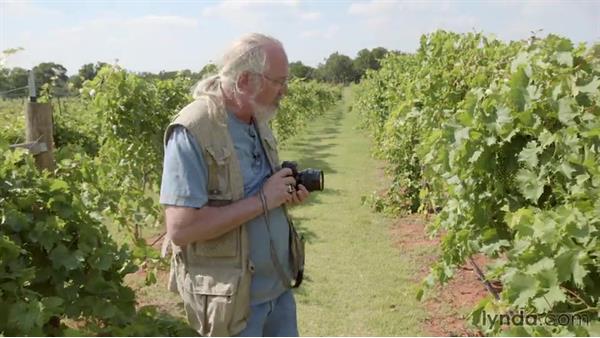 Join Konrad Eek for an in-depth discussion in this video Shooting black and white in a vineyard, part of Analog Photography: Shooting & Processing Black-and-White Film.

…So, one of the things that was nice for me as we set up to do this work here,…is I had a day yesterday that I could kind of wander the grounds, and look for…photo opportunities.…Particularly, when you're doing landscape photography, the more familiar you,…you are with a shooting environment, the better success you're going to have.…And one of the things I was struck by was the play of light and…shadow in the vineyard, the difference in the texture of the leaves,…the roundness of the grapes as compared to the plainer nature of the leaves,…once again, round versus the jagged edges.…

So I've started thinking about ways to capture this effectively.…And one of the things that I thought once again,…film does wonderful things with shallow depth of field.…Let's get the grapes in sharp focus.…And particularly try to find a cluster of grapes like this,…where you see bright highlights, bright sunlit highlights on the grapes.…And then some of those same highlights on the leaves, but…also deep shadowed areas as well.…

Video: Shooting black and white in a vineyard