Safety next: the gear 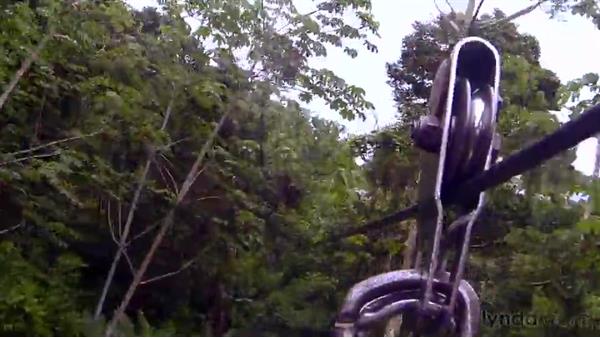 (tropical music) - Getting point of view shots is a lot of fun, particularly with video. Now GoPros and most action cameras can shoot both stills and video. I found that the most enjoyment, because the image quality is gonna be a little bit less, came from the moving image. Now, to get the best image, it's a little challenging. When you're zip-lining you're wearing a big body harness, so there's not a lot of places to attach a camera.

I took a carabiner clip and attached one and let it dangle off to the side where it wasn't going to get in the way. In fact, I could even tuck it under my armpit and close it or put it in the vest pocket on my camera vest. Make sure that the operator feels you're being safe. But I was then, when I got to each platform, able to take that camera out and shoot great shots. It's not just the act of zip-lining, sometimes it's the fact that you are hundreds of feet up in the air on these platforms seeing wonderful views of the forest or the canopy and you can get some fantastic shots of wildlife or of the actual environment.

Additionally, you want to think about where you're going to mount the camera. Now, a chest-mount is the most stable. It's gonna make it easy to get some great shots. Unfortunately, it might be blocked by your harness or by the tethered ropes that are going to the carabiner. While this was a great shot, it wasn't often as usable. But it really puts you in the action and made me feel like you were zip-lining when I shared the footage with others. A lot of the places will have the ability for you to use head-mounts. When you zip-line, you're going to be wearing a helmet.

And most of the companies that we went to had pre-installed GoPro helmet mounts on their helmets. Not necessarily all of them, but most of them. The good news here is that you can use that helmet mount and attach a camera. Keep in mind that the camera might come off. So, if you've got a safety strap, or tethered strap, you can loop that through on the neck strap or the chin strap of the helmet and attach it to the GoPro thumb screw so it doesn't fly off if it falls or gets knocked.

If the head-mounts were not pre-installed, be very careful. If you attach your own adhesive mount to the top of a helmet, you need to use the curved mount. But here's the trick. If it doesn't have 24 hours to set, it's gonna pretty much fall off. One good impact or a little bit of humidity, gee, you get both of those when you're out there on a zip-line. Well, your GoPro is gonna be floatin' down in a river below you. So, make sure you use the pre-installed mounts and you attach that safety strap.

To get the best shot overall, I recommend setting the camera to a Medium or Narrow Field of View. My choice is medium. So, you see a lot but you don't get as much wide-angle distortion. If you attach that camera to someone's body and you shoot wide-angle, you're gonna get a lot of extraneous shots like limbs in there or extra body parts that are distracting from the photo. Additionally, check if your camera supports options like Protune that allow you to set higher quality options for the photo.

Another thing to look at is Burst Mode. We would use high speed bursts, so when we were ready to take a photo, hit the button on the camera and it would fire off several shots. You can adjust those burst settings so they don't shoot all in one or two seconds but they get spread out over several seconds. And these are good, high quality JPEGs that can be used. Another option that I strongly recommend is the 1-button mode. This means that if you set your camera up right and you're using a GoPro, you could turn on the 1-button menu item.

Which means that when you press the power button, the camera turns on and starts to roll. And when you press the power button again, it beeps and turns off. This makes it much easier to know what's going on. Remember, the GoPro has red LEDs so you can actually cup your hands underneath and see that red LED reflected on your palm so you know when it's rolling. Additionally, if your camera supports higher frame rates for video, shoot at those high frame rates. That makes it very easy to do very cool motion effects and it will give you extra options to change the speed of the footage.

The real benefit with the 1-button mode is preserving the battery life. This means that you have that ability to roll and not worry so much about running out of battery. With the colder weather in a lot of these places, the batteries will go pretty quick and you got a lot of moisture, so it's pretty rough on the camera. I found I that I got great shots when I took the time to set the camera up right. So, to re-cap. A medium field of view is likely best. Explore the options for higher quality capture.

Perhaps you have a newer GoPro that supports Protune options for the photo. Use burst mode to capture several images. So you hit the button once and then you could focus back on zip-lining or pulling the brake when it's time to stop. And the 1-button option means that when you turn the camera on, it rolls, and when you turn it off, it goes off. This is a very simple way to start and stop the camera and it prevents you from accidentally changing the menus or shooting with the wrong settings.

I brought enough GoPros that every one of my kids had one and I had one myself. With three GoPros we got a lot of fun footage, but I still found that after we were out there shooting we didn't have enough batteries. If you're gonna change the batteries, do it when you're on solid ground and be extremely careful when you open up the GoPro case because it's very likely that the memory card will pop out. All right, we've thrown a lot of things at you. So, why don't we open up some clips and enhance a couple of photos and video clips to show you what can be done.

Video: Safety next: the gear