Removing clutter with the Clone tool 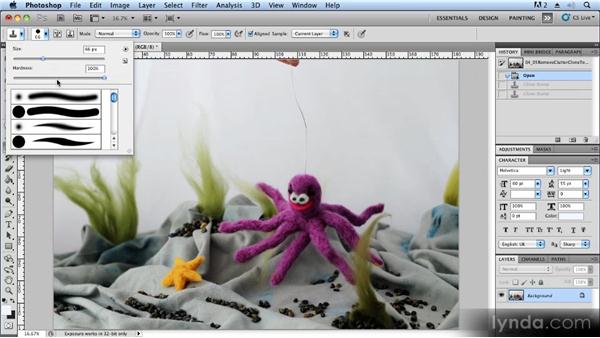 Join Megan Andersen for an in-depth discussion in this video Removing clutter with the Clone tool, part of Learning Craft Photography.

In this movie I want to show you how to remove part of the background of your craft photo using the Clone tool. And the reason you want to do this is maybe you took a photograph of your craft. And when you downloaded it later you noticed there was something distracting in the background of your image that you wanted to get rid of. Or in this case maybe the way you staged that particular craft, you needed some kind of helpful device or some little accessory. Something to help you just position and hold the craft while you were taking the photograph.

And then you had the intent of removing it in post production. So that's what we're doing here. I've taken a series of still images, with the intention of animating them later. So, I've got my craft, right here this purple octopus. And I wanted him to look like he was swimming through the frame when I animated him later on. So what I did was I ran a piece of wire through his head and then I held it and I started him over here in this grassy area and I took a picture.

I repositioned him I took a picture, I repositioned him I just kind of a moved him along through the frame. And now here he is halfway along his journey. But before I can go ahead and do my animating, I need to go through and process all my images. So that's where I am in this movie. I need to get rid of this wire and my finger. Those are not going to show up in my movie. I don't want them. And the tool that I'm going to use to get rid of them is my Clone Stamp tool. So I'm going to come over here to my tool box and select it and right away I can see the size of my brush.

Now if I come up here and click this drop down menu, I can manually change the size of my brush by just scrolling through and. Choosing whatever I want. I'm going to just pick one that's right in the middle for now. And then I might need to do some more precision work so maybe I would come down and use a smaller brush later on, but for now I'm good right there. And another thing that you would want to note in here is the hardness and softness of the brush you're using. So I'm going to show you two examples of that and I'm just going to zoom in.

So that I can give you a really good example of what that would be. So I'm using a smaller brush now that I'm zoomed in. And I'm going to push my hardness way to the left and just take one sample of the C star. I'm going to Alt+ Click on a PC or Option + Click on a Mac. And then I'm just going to drag my selection over here and click it once. And now it has taken a clone selection from the sea star and put it over here on my fake grass, so that's what the soft brush looks like when it's slid all the way over to the left.

When you slide it all the way to the right and take another selection. You can already see that the brush that's hovering over the sea star has a much more defined stroke, a much more defined line. So let's take another selection, by hitting Alt or Option+Click. And I'm going to put that right next to the first one, zoom in a little bit more so that you can see it. And that's a huge difference, that's the same size brush. But I'm just using two different hardness and softness levels on my Clone Stamp tool, so you get really different results.

So I'm going to go back, I don't need that anymore. I'm going to zoom out, I just wanted to show you what those two, what your options were as far as hardness and softness. for me, I'm, I like to kinda keep it somewhere in the middle unless I'm doing again really precision work. And I want to get a very fine line or just kind of haze something out then I would want something much fluffier and softer. So I am going to increase by brush stroke and I am just going to quickly get rid of this whole wire. And then show you something else that you can do with the Clone, Clone Stamp tools. So right now I am clicking Option+Click and I am just clicking right next to the selection And just bringing it all the way down the length of the wire. And I'm going to stop just above his head so we can zoom in and do a little bit more detail work there.

And now I'm going to increase the size of my brush, so I can have a large selection, hit Option or Alt+Click again. And I'm just going to remove my whole finger like that. Now as I zoom in I can see, lets get this brush a little smaller for you, I can see its very light. Its very faint but there is a little change going on in the great background. So I wanted to be sure that I was using brush hardness or softness that was going to take care of blending the tones in the background.

And now I'm going to adjust the flow of the opacity and I'm going to do that. I like changing the opacity on my Clone Stamp when I'm working with something that's really patterned or textured. If you go ahead and repeat the pattern of something that has a very definite texture, then your eye can detect that immediately. So I'm just going to start painting over, just so that you can see what I mean, but as I'm doing this, you can already see, look at that. There are these two parallel lines now, and your eye, or mine anyway, is drawn directly to that, it doesn't look natural.

So I'm going to undo that, I don't like what I've done, and going to check my, where am I? I'm going to need to come back to my Clone tool, and I'm going to check the opacity, and I'm just going to bring it down. And by bringing down the opacity, you can just make a more subtle change with your Clone Stamp tool. And it won't really, it just kind of gently erases what you've done. So, I'm going to just kind of gently erase, and now I'm Clone Stamp and take of some of this fuzz over here, and Clone Stamp it. So that if somebody zoomed way in, it would still look like he had this halo of fuzz all around his head. I don't want it to look like there's suddenly a bald spot over my octopus, because that just doesn't quite look natural.

So those are a couple of things to look at when you're using the Clone Stamp tool. You can change the size, the hardness, the opacity. You can also change the flow. Just play around with your different options, but that's a really quick way to clean up the background of your craft image. When you're, either removing something that was found accidently. Or just getting rid of a staging tool that you ssed to initially set up the scene. And I hope that helps clean up your craft photos. 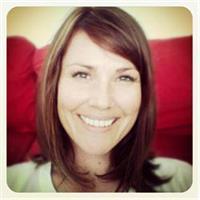 9/26/2011
The ever-increasing popularity of handmade crafts has spawned thousands of blogs, forums, events, websites, and digital tools. With so much competition out there, the best way to catch a viewer's attention is with an incredible photograph of your incredible craft. In this one-of-a-kind workshop, professional craft blogger and photographer Megan Andersen, aka Radmegan, takes you step-by-step through the basics of craft photography, starting with how a camera and its settings work. She shares composition techniques to make craft photos more compelling, image-editing tips that don't require expensive software, and some great resources for getting craft images blogged about, printed, and seen by the masses. Along the way, learn a little crafting by making three different kinds of affordable at-home and mobile "photo studios." Whether you are taking photos of handmade crafts to sell, looking for tips on product photography, have a blog and want your images to get noticed, or just want to improve the quality of photos you plan on sharing with friends and family, this workshop can help you produce great images.
Topics include: