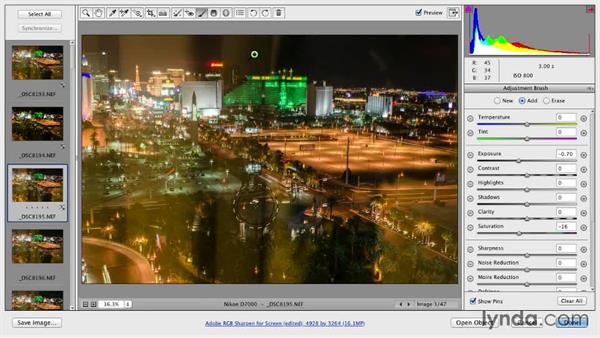 Join Richard Harrington for an in-depth discussion in this video Reflections, part of Time-Lapse Video: Shooting From a Window.

Shooting out hotel windows leads to lots of problems. You've got thick glass to deal with sometimes it causes reflections, you can also be having problems with light spill coming in from the hallway. So I'd like to walk you through several different things that we can take advantage of inside of Adobe Camera Raw or Light Room to make the images look better before we export them for assembly in another tool, whether that be Photoshop, or After Effects, so these are all common problems. The first one up is just that though, a reflection and this happens all the time.

Remember, you're dealing with glass and you're in a hotel, so there's light coming in from the doorway into the room. Or perhaps it's the white backside of the curtain that the hotel uses as a block out and you've pulled the curtain and it's just getting picked up. Let's take a look at a very common scenario and remove the reflections to make the shot look its best. In this particular case, the shot was a three second exposure. So, things that normally didn't show up in the shot suddenly become visible.

Here's that blackout curtain that's designed to minimize the sunlight from coming into your room early in the morning, so you could sleep off the night. In this case, it's being picked up. What we want to do is get the shot looking a bit more like this. Well, this is going to take a little bit of give and take. Essentially, we recover some of the highlights, lift up the fill light, and punch the blacks, and, of course, play with brightness and contrast, but the real magic here is using a brush to paint in adjustments.

Essentially, what I can do here is actually create a painted adjustment to pull down some of the areas where the reflections are the worst. And essentially what we're doing is pulling down the saturation of that area as well as potentially darkening it just a bit. So, let's take a look at that. We'll start here with this image. And we'll do a base adjustment. One of the things that I always look for is the ability to recover highlights a bit, and you see that that brings the details in the side of the buildings back quite nicely, and in fact, I'll pull the overall exposure down just a little.

And of course lift the shadows to balance. Now that's looking pretty good and a little clarity goes a long way. But you can clearly see the reflections. Choosing the adjustment brush, I can adjust the size of that brush. Let's increase that slightly. Put a gradual feather so it blends smoothly. Now, I want to pull down the saturation a bit, to strip out some of this color. That helps a bit. And let's pull the exposure down. There we go. Brush is a little large.

So I'll tighten it up just a bit. Let's bring the saturation back up a small amount. There we go. And by brushing, I can start to add to those strokes and paint over that area. You might find it useful to see the mask as you paint if this helps you clearly attack the problem areas. Remember, you can adjust the feather after the fact, as well as play with the flow and the density to refine what is being selected. Painting over the problem areas there.

I'm getting the areas most affected by the curtain. Uncheck show mask, and then it's simply a matter of playing with some of the exposure settings, as well as a little bit of saturation. Now, you might choose to a little bit of clarity back into those areas. And once you've done that initial painting, you'll notice that the areas over the building are pretty well affected. But the sky areas still really stand out. So in this case, I'm just going to make a new adjustment brush and go after some of those areas a bit heavier.

In this case doing a second pass on the sky. And then you can continue to add new brushstrokes. So, here, I'll go after that, but I'm going to pull that up a little bit so it's not as intense. And just paint over this parking lot slightly. And you see that you can combine a series of strokes to get the desired results. All right. Toggling that off and on, you see I did a pretty good job. Now, you might decide to paint a little bit to blend in and always look at where your brush strokes are to see if you're getting the problem areas.

Once you've made the global adjustment, then you're fine to go back with a little bit of refinement. I will often play with the black slider, pulling that down slightly to just crush those shadows a bit and then popping the whites. You're going to need to find a good balance there to achieve an overall exposure. That looks pretty good. Let's bring the color up a bit. And we'll choose a white balance. Let's start with an auto. That doesn't look too bad.

I'm going to switch that to custom, and dial that in to match, so it doesn't adjust itself too much. Remember, you can look at the auto values and then switch over to custom and dial that in. Looks to be a pretty good overall balance. And I can toggle that off and on, to see the change. I like that, let's choose Select All and click Synchronize, and in this case I would recommend syncing everything. But you need to pay particular attention down here at the bottom, that the local adjustments are also applied.

This is going to allow you to take those paint brush strokes and sync them across all the images so you get a global change overall. When satisfied just follow the rest of the steps we've all ready covered in this video with the ability to save this image sequence out, and then assemble that using your favorite editing or compositing tool.