Packing for a river trip 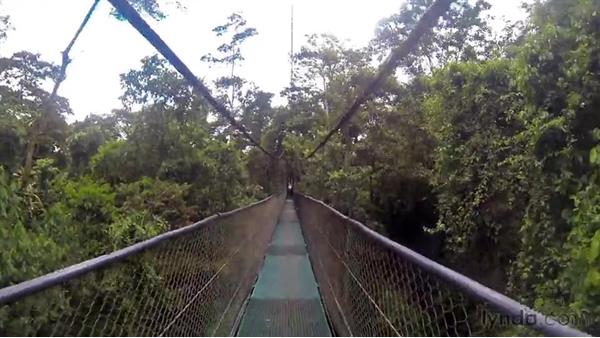 - A shooting scenario that's really common to Costa Rica and many Central and South American countries is the opportunity to go down a river and take a great photo safari. These are really cool cause there's a whole bunch of different types of wildlife. Everything from alligators to birds to lizards, you name it. Even monkeys can show up. Because things are gonna be a wide, different distances away from the boat, you're gonna need some flexibility. So while I've got some great prime lenses, I'm gonna go with zooms in this case.

The primary zoom I have attached here is 75 to 300 millimeters. These may vary. If you're using a DSLR, that might be a 70 to 200, or maybe you have a 28 to 300 millimeter. Just take the most versatile lens you have with the greatest reach. This one, going out to 300 millimeters, actually behaves like a 600 millimeter lens. That's why I'm gonna favor this camera body. My DSLR is gonna take slightly higher quality pictures, just because of the build and the way that the sensor works, but I'm very happy with this Micro 4/3 camera, and it's gonna shoot very quickly.

Remember, one of the nice things about these cameras is how fast they are. You can actually fire off shots in eight, nine frames per second, get really high-speed burst shooting, and that's gonna give you that flexibility. We're taking the GoPro with that option there, having it mounted right to the camera to get some behind-the-scenes footage, but one of the things I wanted to point out is just how flexible this is. Note that I can actually reposition it. So while shooting portrait or landscape, I can get different shots or I could turn it as I'm walking to shoot B roll.

One of my favorite techniques as I'm walking through the jungle from point A to point B is to just leave the GoPro running at the end of the camera. Got the camera over my shoulders, and I'll just record some video of the jungle or of the environment. A simple walk-through to get a sense of where I'm at. This helps me document, sometimes just for internal use, but every once in a while, it'll get some great footage as a surprise. 75 millimeters, in this case, is great, but I want a little more flexibility, so I'm bringing my 12 to 50 millimeter zoom. This is just the kit lens that came with the camera, but that's gonna give me a little bit of extra reach.

A unique thing about this lens that I like is that it actually has a powered zoom. So I could take this and it'll give me motorized zoom in and out for video styles, pull the ring one more, and it's actually a macro lens for shooting close-ups of flowers, which, of course, we're gonna have some vegetation. So essentially, I've got from macro all the way out to 600 millimeters with two lenses. That's why I got two bodies, and remember, it is a river, so while I'm hoping it's not gonna happen, the possibility of getting a camera wet or having a body go down, does exist, so this is gonna make that easier.

I'll also throw some plastic bags into my camera bag so I can keep my equipment dry just in case of splashes or any accidental exposure to water. Now, because I can't go without, I will take one prime lens with me. This is one of my favorites. This is a portrait-length lens, so if you've got something that's in the 70 or 85 millimeter, maybe a 50 millimeter lens, throw that in cause there will be times where you want that shallow depth of field. You'll find some great opportunities to get some creative shots. For example, I know that we're gonna see some animals and we're gonna have opportunity to shoot some things like bats or ants in small spaces.

Having that faster lens, cause remember, zoom lenses tend to be about a five, six, this, 1.4. It's gonna give me a lot more flexibility as I shoot, and really let me try some different things out. But for the most part, I'll travel on this boat trip with two bodies and two lenses already attached to minimize any changeover, and I'll throw an insurance policy in the bag in case something pops up for some artistic shots that the prime lens will come in handy for.

Video: Packing for a river trip