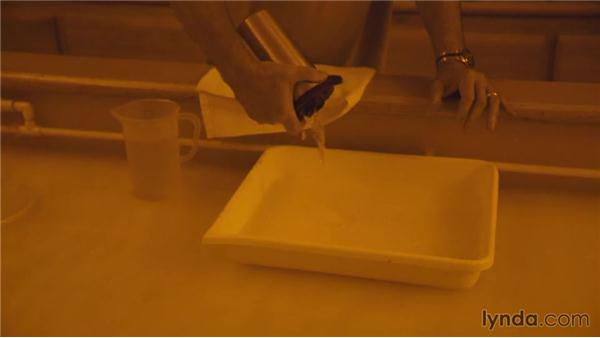 In this chapter I want to share with you the basic techniques involved in taking the negative you made in the processing of your film. And turning it into a photographic enlargement. I think the scale and scope of a darkroom can be intimidating and this one particularly so. It's quite large. It's a teaching darkroom. It's beyond anything you'd see in a home environment. Don't let that bother you. Keep in mind, it's a simple process. Basically you're shining a light on a negative and running the light through a lens to focus it on a sheet of paper.

We're going to cover exactly how you do that, explaining how the enlarger works. We're going to talk about the chemistry that's used in the process. We're going to talk about selection of paper and how to properly expose the paper. Doing a testing process for split filter printing that actually gives you a great deal of contrast control really simply. So that you can quite quickly find your way to a successful work print. I want to stress that the instruction in this section of the course is not intended to get you to a final result, essentially a presentation ready print.

I just want to share with you the basic nuts and bolts of how to make a traditional photographic enlargement with a gelatin silver paper. In order for you to see it and maybe gain a little interest into finding out more about this process.