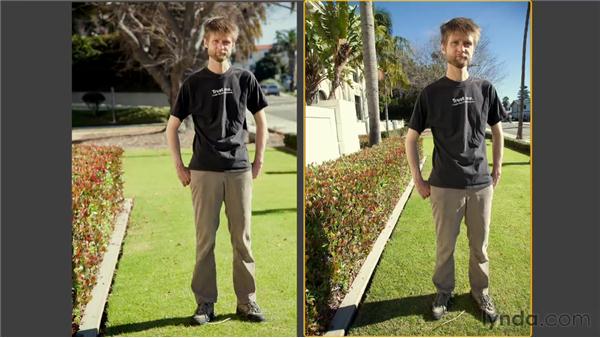 Zoom lenses are great for their convenience. Rather than having to carry an entire bag full of lenses, I can just carry one lens and have a huge range of focal lengths. It makes my bag lighter. It keeps me from having to swap lenses all the time. That's all great. Unfortunately, zoom lenses can also make you lazy, because you might be walking along and see a thing over there and go wow! Look at that thing over there and rather than having to think about where to stand to shoot it, you just where you are and you zoom in and you get the shot. That might be the right shot, but it's important to understand that shooting something way over there from over here is not necessarily the same as going closer.

The image changes dramatically depending on what focal length that I'm using. Here is what I'm talking about. Ben's standing over there, I'm standing over here. I am going to take a picture of him. To do that, I want to for this particular picture I want to fill the frame with him. To get that shot from way over here. I've got to zoom in quite a bit. I'm at about a 100mm here and there is my shot. Reasonable enough picture. He is filling most of the frame, but watch what happens now if I go closer to him. So I'm going to come up here now and because I'm standing so much closer to him, I need to zoom out.

So now I'm all the way out to about 24mm. So I am going to take my shot here, and now look at this picture. A lot has changed between these two pictures. In this second shot where I'm standing closer to him and zoomed out, first of all you can see the whole building that's next to him. In my more telephoto shot, all you can see is this hedge. Look at that tree in the background in the first shot. It seems like it's much closer to him than in the second shot where first of all it's obscured by his body and second, the branches that you can't see up here very far way.

In other words, in the second shot the entire sense of depth in the scene is much more stretched. The background feels much farther away than it did in the first shot and that's the general rule of thumb. When you're standing farther away to get a given image, you're going to have a compression of the sense of depth in your scene, because you're going to have to zoom in. When you're standing closer and zoomed out, you're going to have more of a sense that the depth is stretched. In other words, I can greatly control the sense of space in the scene by choosing where I'm going to stand and therefore what focal length I'm going to use.

If I want to create a real intimate sense of depth, then I probably want to stand back there and zoom in. If I want to create a more expansive sense of depth, maybe even an outright alienating sense of space in the scene, then I'm going to want to stand closer and zoom out. So even though your zoom lens gives you a great deal of flexibility and the capability to reach far into the distance to grab something, it's imperative that you learn to pay attention to this sense of space in your scene and understand that where you stand and the associated focal length that you choose is going to greatly impact that sense of space.

I've talked here about depth compression and depth expansion and all this kind of stuff. It's great if you know that, but know that you can just see it in the viewfinder and you can see it when you review your image on your LCD screen. The thing to take away here is to learn to pay attention to that relationship between your foreground and background and the overall sense of space in the scene. And know that you have control of that relationship in sense of space by choosing where to stand and what focal length that to use. Watch this. The camera operator is pulling the camera backwards while simultaneously zooming in with the lens and trying to keep me framed the same way the whole time.

Now watch the background. You should see that wall behind me getting closer and closer. This is exactly like what happened in the two shots that we-- the two still images that we took earlier in this movie. As is camera position changes, the sense of depth in the scene changes. So because this is video you're seeing each and every little step along the way, but it's the same thing that was happening to us when I was shooting stills earlier. So again the thing to take away here is where you choose to put the camera and the associated focal length that you have to use greatly impacts the sense of space in your scene and the overall sense of scale of the background.