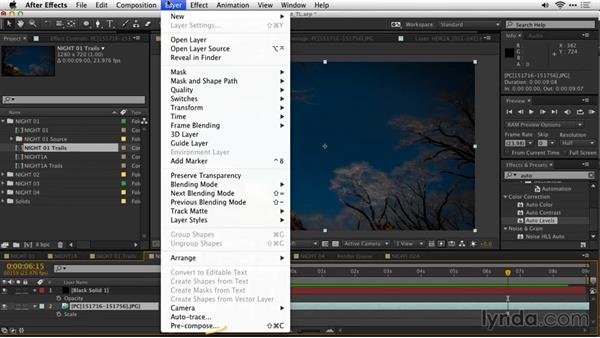 Learn how to add star trails to a time-lapse with Adobe After Effects CC.

- The challenge with astrophotography and star trails is that it's an incredibly long exposure. You're literally getting the star trails moving across the sky as the stars arc. And essentially, with the long exposure, you are capturing that movement over time. The challenge with this is pretty simple. Those shots can go for an hour or two. So how are you gonna do time lapse? Imagine a time lapse with three or four frames, it's not very effective, right? You're not gonna show the passage of time because it moves so quickly.

Fortunately, there's a little bit of trickery we can add in post to fake star trails that matches this print. Here's the first version of the shot with the stars moving. You could see that the stars move through the sky, as do the clouds. Let's zoom in a little bit here, and we'll take a look at the stars up close. And you see they do indeed move. Now that's 400% magnification, that's pretty high. but let's take a look at 100%.

And they move there. What I want to do, though, is get a bit more streaks. To help, let's make sure Frame Blending's on. It is, so that's good, and I'm gonna clean things up a little bit. Let's put this into the project, and we'll move this into the source folder, and I'm gonna duplicate this one and rename it Trails. You'll note that I've included another one in here for reference that you could take a look at if you'd like.

The key to this effect is to add up details over time. To do that, I'm gonna select this Layer and Pre-compose everything inside of it. Layer, Pre-compose. This forces all of the frame blending to happen inside and I'll Move all those attributes in there, and let's call this Night1PreComp. This'll force the Frame Blending to happen first.

Now, on the outside of this, I'm gonna apply Time Blend. This is an effect from Cycore, and it's included with After Effects, so if you type in Time Blend, you'll find Time Blend FX. Drag that onto your PreComp Layer, and what we need to do is Paste the values. It's gonna take frames, sample them, and Paste them on top. What I want to do is add those up, so I'll use the Lighten Blending mode, and set this to about 95%, which adds up the values over time.

When I invoke the RAM Preview, notice how that draws. Now you won't see it if you just simply park the playhead. This is a type of effect that really requires a Preview, so let's Preview that at Full quality for a second, and take a look at the results. And what's gonna happen is that as the stars move, they're going to create of trail of light behind them. Pretty cool effect, and this matches some of the looks of long exposure photography that you might see.

There's the star trails. So, just a little bit of visual trickery with the Time Blend effects. Remember, apply the Time Blend effects, make sure that you set it to Paste its values, and then try some of the Blending modes. Lighten tends to work pretty well, and I generally bump it up to a relatively high value of 95 but you can use anything between 60 and 95 to get some pretty good results. All right, let's take a look at some of the other shots that we post-process and see how they look once we put the pieces together.

7/20/2015
Shooting time-lapse video is a fun activity that can yield fantastic results—if you have the right gear and skills. Rich Harrington shows you what to bring and what to do (in field and in post) to get great-looking nighttime time lapses. Learn how to create a stable platform for the shoot, illuminate objects on the ground, calculate the right shooting interval and exposure, and locate constellations and planets using a few handy apps. Rich also shares techniques for capturing multiple exposures and sunsets accurately. In the final chapter, he'll show how to develop your shots with Camera Raw and Lightroom and assemble the videos with tools such as After Effects, LRTimelapse, Photomatix, and Photoshop. Plus, get some tips that will help you fake star trails and smooth out noisy images.
Topics include: