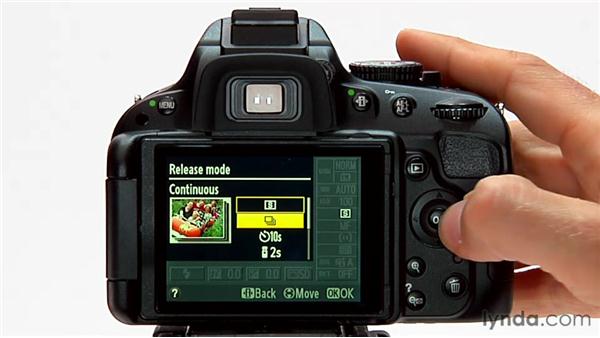 Henri Cartier-Bresson spoke extensively about the decisive moment, that one particular moment that happens that is the perfect decisive expression of whatever scene or event you're shooting. Because he was a genius, he was often able to fire his camera at that perfect decisive moment. For the rest of us, there's Continuous mode. In Continuous mode, as you hold down the shutter button, the camera will continue to snap frames one after another. Continuous mode is a great tool for shooting in fast-moving environments-- sports, street shooting, nature shots-- but it can also be ideal for portraiture when a person's face is making lots of tiny subtle changes and you're not sure which is the ideal expression.

However, you cannot use Continuous mode indefinitely, that is, you can't just hold down the button and expect the camera to always keep shooting. When you take a picture, the camera has to move a lot of data around and do a lot of computation. You can take pictures faster than your camera can get them written to the media card, so your camera has a memory buffer that can hold a certain number of pictures. As you shoot, your images can be quickly thrown in to that buffer. Then the camera can start the process of copying images from the buffer to the memory card while you continue to snap away.

If the buffer fills, then your camera will cease to be able to take pictures, and you'll have to wait for it to empty out before you can start shooting again. I set Continuous mode by changing the Release mode, which I can do in my Info/Edit screen. It's this one right here; by default, it's set to S, which a single shot. I can see that I'm in the Release mode menu here. Press OK to bring out my options. The second one down is Continuous. Now there are some other options down here: Self-timer, and Delayed remote, Quick-response, Quite shutter release. We're going to look at those in other movies; right now what we're interested in is Continuous mode.

Hit OK to take that and then back to my shooting mode, and now I'm ready to go. As long as I hold the button down, I will shoot usually around up to four frames per second. I say up to because as the camera's buffer fills, up your shooting rate will go down. Now the buffer is that number over on the right side inside your viewfinder. When you're not shooting, it shows you the number of frames remaining; when you are shooting, it shows you little lower case R and a two-digit number. That two-digit number is how many shots you can continue to take at full speed.

When it gets down to 0, the camera will need to take time to dump images out to the card, and you'll see the light right here light up. And then as it's getting images out, that number will start to go back up, and slowly your shooting speed will come back up to normal speed. Your buffer is going to be larger working with JPEG images because they don't take up as much memory as RAW files, and how quickly it takes them to get out to the car is going to depend on the speed of your card. If you've got a Class 6 card, which is the bare minimum recommended for shooting video using the camera's video mode, then you have a very speedy card and you shouldn't have to worry about images going out to the buffer.

If you have a slower card, you may more regularly hit a delay. When you're done, you'll probably want to turn shooting mode back to Single Shot mode just so that you don't accidentally rifle off more shots than you need and take up more space than you want to. That's Continues mode. It's very handy for obviously shooting fast action where you're not sure precisely where the decisive moment is, but it's also useful for shooting portraits. People's expressions can be very fleeting and change very subtly from one moment to the next, so sometimes hitting a burst of four or eight frames over a couple seconds can be a good way of ensuring that you get precisely the expression that you want.

11/18/2011
This course details the features, controls, and options in the Nikon D5100 camera. Author Ben Long provides an overview of a digital single lens reflex (SLR) camera and reviews the Nikon D5100 camera's components and basics of operation, including changing lenses, navigating the menus, shooting in Auto mode, and reviewing and managing photos on the camera's LCD screen. The course also covers white balance options, advanced metering and autofocus controls, flash, and shooting HD video, and includes a chapter on sensor and camera maintenance.
Topics include: