Chemically processing the film in a kitchen 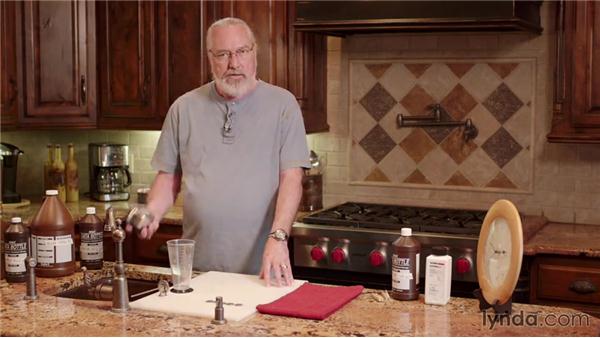 Join Konrad Eek for an in-depth discussion in this video Chemically processing the film in a kitchen, part of Analog Photography: Shooting & Processing Black-and-White Film.

…Now that we've got the film loaded onto the spool and in the light-safe canister,…we're ready to start the chemical process that will turn the latent image trapped in…the silver halide crystals into black metallic silver,…giving us a negative we can use to either scan or…make an enlargement in a traditional photographic process.…We've drawn water, nine ounces of water, at a temperature of 75 degrees.…And to that, we're going to add one ounce of the developer.…The developer, unlike the other chemicals we used, is a one shot chemical.…

You use this solution once and discard it.…And then typically when I do this, once I've finished with the chemical,…I'll set it to the side and that helps me keep track of what I'm doing.…I'm going to give this a quick stir to make sure that the stock solution we…just added to make a working solution is well blended.…I'm going to rinse that thermometer off.…And then it's important to remember a couple of things about…the development process.…The level of dilution of the developer affects the time and…

Video: Chemically processing the film in a kitchen