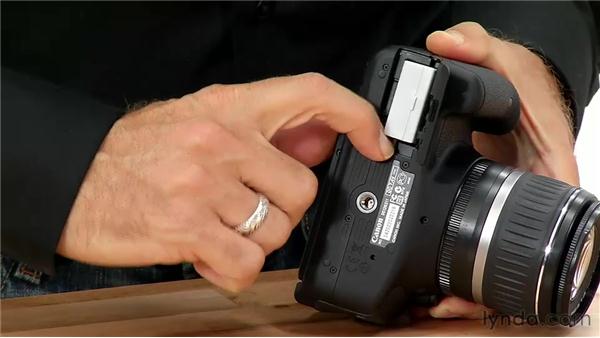 Your camera has needs. It needs power, needs a place to store images. Usually it gets its power from a rechargeable battery and it stores its images on a removable media card. Now the battery in your Rebel T3i can be recharged with the included power supply, you just snap the battery in here. The good news is the battery only goes in the right way. There are these contacts on this side of the battery, they need to match up with those contacts right there, so you just push the battery in like that and snap it down. There should have been a cable, a power cord included with it, put that in there, plug it into the wall.

When it's charging, the Charge light will light up. When it's finished, it will light up the Full light, then you're ready to take it back out and put in your camera. To get it into the camera, you just go to the battery door on the bottom side of the camera right here. There is a little switch on that you have to flip, and then you just pull the door open. Like the charger, the battery only goes in the right way, and there is actually a little diagram here to show you how it goes, but the contacts go first and you just slide it in like that and push it, until it clicks, this little switch down here grabs on to the battery.

So if the battery comes out of the camera, it's because you didn't push it far enough. So shove it all the way in there, and then close the door. To get the battery back out, you have to obviously open the door, and then you need to pull this little switch, and the battery will come shooting out. You can then grab onto it, pull it the rest of the way and recharge it or get another battery in there. To insert the media card, you just go right around the corner to this door right here, pull it towards the back of the camera and then swing it out. Like the battery, the media card only goes in the right way and there's a little diagram to show you.

One corner of the card is chopped off, so that corner goes towards the top of the camera and the label of the card goes towards the front, but don't worry. It actually won't go in the wrong way. So you just push it in and like the battery you push it until it clicks and stays. If it comes popping back out, you didn't push it in far enough. And then the door just closes and snap shot. To get the card out, don't just pull it out, and in fact, you are going to have a hard time doing that because there's not really any room to grab on, instead you push on the card and it comes popping out.

Now it's basically let go of it, so you can grab on and pull it out. Now these cards are pretty fragile. You have got to be careful with them. If you bend them, if you flex them, which is easy to do if you pull it out in an angle. If you do that, the case can split open. It won't necessarily damage the actual recording medium that's inside the case, and you can very often just match the case back together, maybe even glue it with a teeny bit of model airplane glue or plastic epoxy, just be sure that you don't get any inside on the actual recording medium. So there we go, my camera has got a battery and a media card.

It's ready to start shooting.

11/18/2011
Shooting with the Canon Rebel T3i (600D and Kiss X5) details the features, controls, and options in the Canon Rebel T3i camera. Author Ben Long provides an overview of a digital single lens reflex (SLR) camera and reviews the Canon Rebel T3i camera's components and basics of operation, including changing lenses, navigating the menus, shooting in Auto mode, and reviewing and managing photos on the camera’s LCD screen. The course also covers white balance options, advanced metering and autofocus controls, flash, and shooting HD video, and includes a chapter on sensor and camera maintenance.
Topics include:

Q: Will the lessons in this course work with the Canon T3 too?

A: The main differences between the Canon T3i and the T3 are some video capabilities. Other than that, and some minor menu differences, you should be able to use the lessons in this course with the T3 with no issues.