Assembling the shot with After Effects 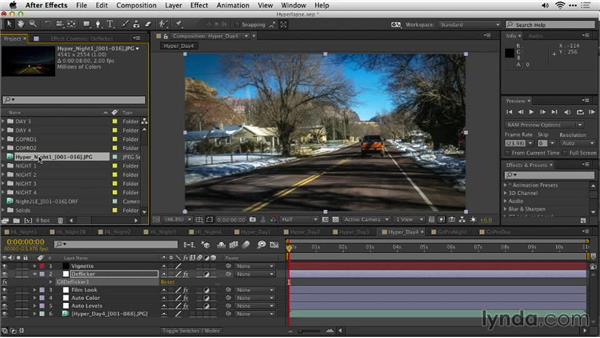 Join Richard Harrington for an in-depth discussion in this video Assembling the shot with After Effects, part of Time-Lapse Video: Hyperlapse.

Now that the RAW files are updated and the image sequence is exported, let's bring both in to Adobe After Effects. After Effects is included with Adobe Creative Cloud. And even if you've never opened it before, you probably have access to it. Now, it's a fairly intimidating program, but I'm going to walk you through the essentials. And remember, we do have a comprehensive time lapse title available here on lynda.com, but you can also check out for some of the more fundamental skills if you're a bit rusty with After Effects. File>Import>File. It's Cmd+i on a Mac, or Ctrl+i on a PC.

I'll choose the RAW images here, and make sure that the Camera Raw sequence box is checked. When I chose Open, you'll note that it tries to bring them in, except there's a gap in one of the numbering. So let's click OK for a second, and I'll hit Cancel, and we need to renumber the files. So, we'll head back to Bridge for a second, you might remember I talked about this problem before, so we'll select all, and chose Tools>Batch Rename. And, I'm going to call this Night2, long exposure and renumber it.

I can also preserve the original file name in the metadata for the images. Click Rename. And you'll see that they are all properly renamed. In the future, you can always choose Tools>Batch Rename, and use the preserved file name to restore the file name if needed. Alright, File>Import, and let's grab that first image. Make sure it's a Camera Raw sequence, and click Open. The dialog comes up, offering you the chance to process the image, but I'm going to use the settings I've already done, so I can just click OK.

And it comes across. File>Import, and we'll grab the JPGs as well, there we go, and bring it in. You'll note that this comes in as a 30 frame per second sequence. And, what I'd like to do is modify that. So, I'll choose File>Interpret Footage>Main. And in this case, I'm going to assign a very low frame rate of two frames per second. And click OK. It's just at the bottom of this dialogue box, hitting the Return key does the same thing.

I can now also choose File>Interpret Footage, remember, or Option+Cmd+c or Alt+Ctrl+c. Select the other image sequence and press Cmd+Option+v. Or Ctrl+Alt+v, and you see that it pulls that in, as well. So, that works well, we have a two frame per sequence image sequence. You might be wondering, why such a low frame rate? Well, essentially what's going to happen here is that the image is going to be held for 12 frames. Now, that would be a really boring time-lapse if it was one image for half a second, then the next image, and then the next image.

But through a little bit of visual trickery with frame blending, we can create slow dissolves between these images without a lot of work. Let's add these both to a sequence. I'll drag then on to the New Comp icon. And tell it to make multiple compositions. And click OK. Let's start here with this one. We need to change the composition setting. Composition>Composition settings. And I'll use a preset of HDTV 720. And assign the frame rate of 23.976 and click OK.

Now that that's done, each image frame is going to hold for half a second. Now, this is a bit big, so we'll use the Scale command, and scale that down. By the way, a useful shortcut is Cmd+Option+f or Ctrl+Alt+f to force it to fit the frame, and it very quickly scaled it to the right size. I'm just going to bop that up a little bit larger to 30. And use the anchor point there just to tilt that down, and that got me past a little bit of a dark edge. That RAW one is set up.

Let's go to the non RAW one, the JPEG files, which will behave a little it more quickly. The benefit of the RAW is just flexibility. Remember, you can always select something in After Effects, and press Cmd or Ctrl+e to edit original. And be right back into the Camera Raw dialog where you can make updates. But those files are a bit robust. Here's the JPG version. Let's check the composition settings real quick, and we'll go with the preset. And assign the correct frame rate. Click OK, and it updates.

Twirl this down and choose Transform Scale. And I can scale that to taste and adjust the anchor point. That looks pretty good. And if we play this back as is, you're going to notice that what happens is that every frame is holding for half a second. And it looks like a fast motion slide show. While this works, it doesn't create the effect that I envisioned with these long exposures. I'd like these to smoothly evolve from one image to the next, so, that's frame blending

3/28/2014
Hyperlapse = time lapse + camera movement. You can get the effect by moving your tripod manually or along a track, but shooting hyperlapse from a moving vehicle is the one guaranteed way to get really dramatic time-lapse footage. And it doesn't take a lot of gear. In this course, Rich Harrington introduces the equipment you need and the techniques you should use to capture great hyperlapse sequences, as he travels around the Nevada desert during the day and captures the bright lights/big city of Vegas at night. When he returns to the studio, he shares his post-processing tips in Adobe Camera Raw, Premiere Pro, and After Effects.

Video: Assembling the shot with After Effects