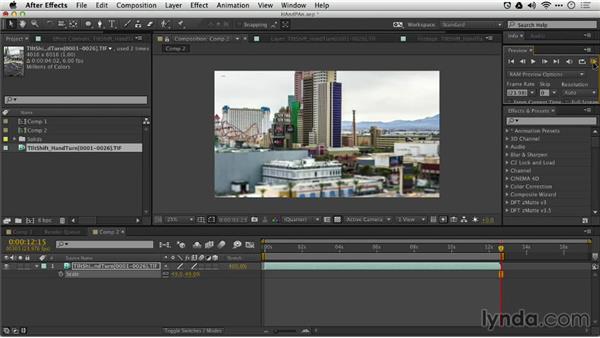 Join Richard Harrington for an in-depth discussion in this video Adding motion in post, part of Time-Lapse Video: Shooting with the Camera in Motion.

Let's take a look at how some of these low-tech solutions turned out. I find that things like shooting oversized plates and adding moves and post, or the camera lapse type solutions with the GoPro work pretty well because it's easy to get smooth movement. However, when you start to do some more of the manual movements where you're panning the camera or pushing it along the slider, it's a bit harder to get the type of precision that you want. Sure you have movement, but it's not necessarily the movement that's fluid, or smooth. Lot of times it looks rushed or at best, jerky.

But sometimes you have to learn how to use the tools that you have in your hands, and if nothing else using some of these low-tech approaches will give you the opportunity to experiment with the concept of motion and refine some of your skills, particularly previsualization. In this case, I've got that tilt shift time-lapse that we recorded handheld. Now if you look at this particular shot, one of the things to realize is there's not very many frames. So what I ended up doing was interpreting the footage at a lower frame rate of six frames per second.

If we preview that, what you'll see is that it is a hand-turned time-lapse and it holds each of those frames for a long bit of time. Now what I'm going to do there is go past that initial starter frame where I marked it out with my hand and find a clean beginning frame. Just drag through, and everything's framed up there for my next take. Just advance. Mark my end point and I am going to use the rest of that shot.

Now when I make a new composition here, I'll set the frame rate to 24p. And drop in that hand-turned time-lapse. Now you'll see it's not very long, but using the stretch factor here I'm going to stretch that 400% which makes it quite a bit longer. Once I've done that I'll also turn on Advanced Frame Blending. Now with the Advanced Frame Blending off I want you to just look at it first. Let's scale this slightly, and we'll do a quick preview.

And what you're going to see without the advanced frame blending, is that it essentially pops from one frame to the next, looking very stuttery. However, I'd like that to be a bit smoother. So by enabling Frame Blending and turning on the Advanced option watch what happens. You'll notice that After Effects can essentially morph from one frame to the next and depending upon the amount of movement and activity in the shot, surprisingly, for hyperlapse-type animations, ones where you're really maneuvering the camera by hand, whether that be sliding the tripod from place to place, or panning the head, this sort of visual trickery of advanced frame blending is surprisingly good.

Now some of the elements, like the signs there, appear to be morphing just a little bit, but it's pretty cool and you're seeing that nice, cool transition. Now the first few frames had a little jump there. No big deal, I'll just go in a bit. Mark my beginning point, let's preview the rest of that. And you'll see that After Effects is able to create new interim frames. Now as you look at some of these, occasionally you could see a little bit of distortion, particularly if something jumps in the frame and then leaves, like a big strong object passing by.

But a lot of times this Advance Frame Blending can be useful to take a time-lapse that doesn't have enough frames and really force it into a new duration. And in this particular instance it did a nice job of smoothing out my handheld turn. Now I like the way that this is looking, but as an alternative I can also put a bit of a keyframe in a move. By keyframing the anchor point I could essentially create not just a pan from left to right, but a digital tilt up to reveal more of the frame.

And when you see that play back, you'll see that it moves across, it slowly begins to look up in the frame and we begin to go from the tilt shift area, down here in the parking lot, up to see more of the entire shot. Take a look at both those two shots back to back. First up, here is the panning left to right. And you see there the new interim frames really fill things in nicely. And now here is the pan from left to right with the digital tilt being added in After Effects. 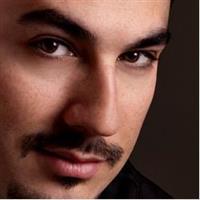 In this course, author Rich Harrington is joined by time-lapse video expert Keith Kiska. Together, they explore the hardware, software, and creative decisions involved in creating moving time lapses, while on location in Las Vegas, Nevada. Rich and Keith detail the types of motion that you can add to a time-lapse video, from basic movement of the camera to left-to-right, sliding, and two- or three-axis movements with high-end, motorized rigs. They also demonstrate hardware add-ons in a variety of price ranges, and show the post-production techniques that yield the highest quality.