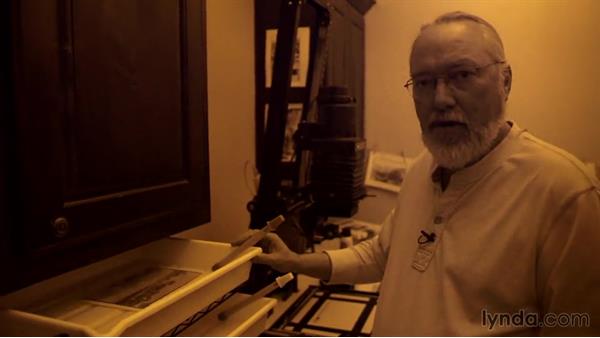 Join Konrad Eek for an in-depth discussion in this video Doing a gradient burn to create an adjustment similar to a levels adjustment, part of Black-and-White Darkroom: Printing Techniques.

- In this particular image, we've got some exposure challenges. I really like all the textural information here in the sage and so on of the high desert. The subtlety of that texture would be really hard to adjust. When I did my test, I selected my base exposure on what made that look the best. When I did my work print, I'm really pleased with this area of the print. All of that is working for me, but our foreground area here, the sand in the foreground, I think, is a little bit too light and is not giving me as much information as I'd like.

I feel like the sky doesn't have as much drama as it could. We're going to do another burning technique that I'll call a gradient burn. This would be really comparable to making a levels adjustment to get the tonality that you wanted and then creating a levels mask using the gradient tool so that, that levels change was effected in a gradient. We can do that with a burning technique I'll show you now. For a gradient burn, just to be more accurate, I'm going to use a card.

One of the things about these cards, I've shown you the white surface all the time. It's important to know that you want to get a black core matte board so it's completely opaque. These light sources are very dim, but sometimes, you might get into a long, long burning situation, where if you don't have completely opaque board, you might get a little bleed through the board itself. Remember, you need something that's dense. I like the white surface because it allows me to see exactly where in the negative I am. We're all set up from doing our test.

I'm going to put in a fresh sheet of paper. Then my base exposure was four seconds with a number five filter, and three seconds with a double zero filter.

Then to do my burn, I'm going to select a slightly above-normal contrast filter. I'm going to use a number three filter for both of the burns I'm going to do. This will give me just a little more contrast here in the normal range. That's one of the beauties of having this whole set of filters as you can really, when you choose to burn, you can be real selective about how you do your contrast. Then once again, I've got the light source blocked with the white card. I'm just going to turn this on, and I'm going to take a minute to orient myself.

There is my horizon line. I'm just going to count it out. What I'm going to do is I'm going to draw the board down and away until I see the edge of that horizon line hit the edge of the board, and I'm going to raise it back up. Remember, your total exposure was only about seven seconds. If we do about five seconds in this whole process, about 2 1/2 down, 2 1/2 back up, I think we'll get a nice result in the sky. Here we go, it's one, two, three, four, five, okay. That was the gradient for our sky.

Now we need to do the gradient across here for the sand. I'm just going to do the same thing, just one, two, three, four, five. Now we'll go ahead and turn the light source off and run this through the process and examine our result. This gradient burn is one that, I think, you'll use quite frequently. It's rare that we get good balance between skies and what's happening in the foreground.

Sometimes, you can make adjustments in exposure using colored filters for contrast control in the exposure part. I talked a little about that in my course on shooting and processing black and white film. The control you have is nothing compared to what you can do on Photoshop with a colored image that you're using as the black and white, but those colored filters can really be a great tool to help you before you even get into the darkroom with an image.

The other thing you might do with that kind of gradient burn, a lot of times, if you've got less expensive lenses, you might have vignetting or brightening in the corners of the frame and you can burn that back down to hold the viewer's eye in. Particularly, the way I print full frame with the black line, that creates this nice visual block at the edge of the frame to hold the viewer's eye in. If you're not printing that way, if you're cropping, oftentimes, you might want to add a little additional exposure on the edge of the frame, particularly on the sky side just to help the viewer keep their attention on your beautiful imagery rather than letting their eye wander out of the frame.

I'm going to let this fix and then we're going to rinse it and we'll examine it under our inspection light. Here, we have the result of our last exposure Here's the original. Notice first, look at the sand here, how I was concerned about the lack of textural detail. All of a sudden now, there's all of this wonderful, subtle information we've gained without really darkening it so much that it doesn't read as sand. That's the one thing, if the tone had gotten much deeper, it would have started to look like dirt rather than sand.

I talked about how I felt the sky needed a little work, too. I wanted to bring a little bit more drama, and I think we've really succeeded in that. I think part of that is due to filter choice. You'll want to practice and experiment with the different contrast filters as you do different burns. When you come to an image like this, it might be a good exercise to try the exact, same amount of time with different filters to see how the result varies. The reason I picked the number three was I wanted to boost contrast a little bit above normal but not too much above normal.

One thing that happens when you burn with high contrast filters in the sky, a lot of times, artifacts that are in the negative that are not really discernible with the medium, the low contrast filter, start to show up and you get little blotchy chunks in the sky, comparable to JPEG noise. Those are one of the indicators that you may have pushed it too far with your contrast range. What I wanted was to get drama and richness in the blue parts of the sky.

Then if you look at these two clouds, there's a little textural information here, but there's also clean, white highlights, like you'd see in a brightly lit, cotton candy cloud sky. Here, we've increased the drama in the darker areas of the clouds without sacrificing those bright white, highlight areas of the cloud. That's why I went with a number three filter. I wanted to punch things in, in that tonal range. I think if you went to a much higher contrast filter, you'd start to get into trouble.

One other thing to keep in mind, too, you could have created interest in the original negative if you'd used the contrast filter when you were exposing the film out in the field. One of the things I like to do is build on images. There's nothing wrong with going back out and reshooting. Obviously, you're not going to get the exact, same weather conditions, but if you shoot things that are around your home or close enough to you that you can visit them often, revisiting things sometimes brings great success.

I've looked at all of the work that Ansel Adams did right around his home and all of the trips to Yosemite. He became really familiar with the area and knew what he wanted compositionally quite often before he even got to his spot because he'd visited it before. Work back and forth between creating new images and perfecting them in the darkroom. Overall, I'm really pleased with the result of the two edits we did here, the two gradated burns, and I think I'm ready to move onto another image.

3/13/2015
Once you've shot and processed a few rolls of black-and-white film, the next step you can take to explore analog photography is printing that film in your own darkroom. In this course, a follow-up on his Shooting and Processing Black-and-White Film course, photographer Konrad Eek introduces the fundamentals of black-and-white darkroom printing.

First Konrad provides a tour of his own darkroom space, and introduces the key ingredients that dictate how pictures print: paper, exposure, and contrast. He checks a series of images by developing initial test prints, and then explores options for refining the images in the darkroom via cropping, burning and dodging, and adjustments to the development time. When he's finished making prints, Konrad shows how to clean up the darkroom and introduces different paper choices and resources for black-and-white film photographers to explore.

Video: Doing a gradient burn to create an adjustment similar to a levels adjustment