Controlling color with the Color palette 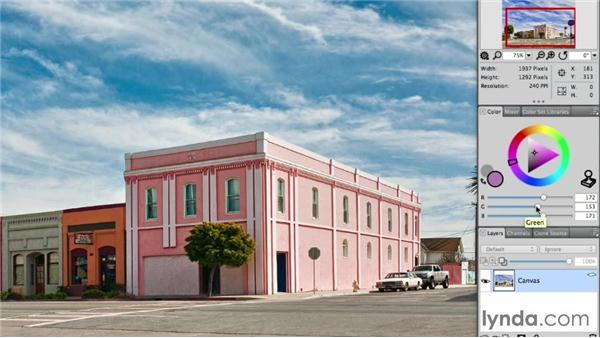 Color is a major component of Painter. After all, you need it to paint. The color panel is Painter's primary color selecting tool. Sporting an intuitive interface, the color panel makes it easy to dial in a desired color. Let's take a look at this colorful tool. So you'll find the color panel over on the right side here, and it's displayed by default in the default workspace. And before we even get started, I do want to show you one thing, if you're in the brush tool, if you hold down the Option or Alt key, that brings up the dropper tool and this lets us quickly select colors from an image.

And you'll find that you'll be using this very often in order to sample a color from your image. But the shortcut makes it very convenient to be in your brush tool and yet, have access to a color on your canvas. Let's just take a look at how this works. It's basically two components. You have what's called the hue ring. And the value saturation triangle. And the hue ring works basically by just moving it around on this circular interface, you can also just click any area in the interface you want.

So let's say you want a shade of blue, well, basically you just go down into here, and you can go anywhere from cyan into blue. So somewhere in here would be A color that I might want. If I want to then refine it, we use the saturation and value triangle. And the corner on the farthest right is this particular hue on the hue ring at its full saturation. As I go up to the upper left, I'm tinting it with white, until I get all the way up to that upper Left corner, where I have full white.

Conversely, when I go from the far right corner down to the lower left corner, I'm shading that color. I'm adding black to it. And then what you've got then along this left side is a gray scale from white to black, and in the triangle itself are all the various permutations of the saturation and value of the hue that is currently located on the hue ring. So the idea behind this is it's a completely visual way to get to color.

So, a lot of times, I will use this. If I'm working on a color. And I want it to just slightly alter one component of, like I want to increase the value of it a bit, I can use just the value slider and isolate that control with the slider. Same with something like saturation, if I want to up the saturation. The only thing I'm changing in this case by using the slider is the saturation. It can get a little difficult to isolate just one of those components when you're visually doing it within the saturation and value triangle.

Itself. The other thing about the interface here is that, you can change the scale of it. You can make it smaller or larger. In a cramped environment like this where I don't have the highest resolution screen, I tend to reduce it to its minimum size. However, you're giving up some precision when you do that because there are now less pixels in this image of the slider at the moment. To be able to represent all of them, as you enlarge the slider, you are literally increasing its resolution, because there are now more pixels making up this image of the triangle, and as a result, there are more spots in the interface for it to be able to register all of the colors within this triangle.

So a larger version of this circle and triangle combination gives you more precision. When you reduce the scale you're giving up a little bit of that precision. So the upshot here is that the color palette is a very useful tool, and since you're likely going to be painting, hopefully, most of the time with color You're going to need a way to get at those colors, and that's exactly what the color panel is designed to give you. 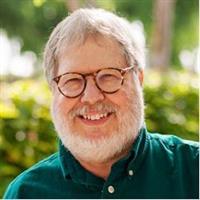