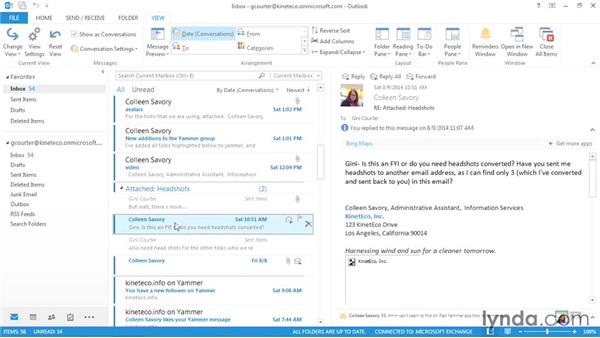 I've just returned from a short vacation, and while I was gone, we started a new Yammer implementation in my organization, so I'm immediately immersed in a series of conversations that have been happening, and each of these conversations is different. Some are important. Some of these emails will need my immediate attention, and others have already been handled by other people on my team. We have some conversations that start in one place. For example, there might be an email here, but there was an earlier email farther down my information viewer here in my inbox, and it's not easy in this normal view to be able to see that two messages go together when they're in different places in my inbox.

Now, the way I know something is part of a conversation is that it will have a triangle in front of it, just like that. This actually happens to be an email that I was working with yesterday. I replied to it, so in two ways, you can tell you're in a conversation. One is, you see this triangle out to the left, and if you click the triangle, it expands the conversation. Second, though, I can tell by looking and seeing that there's a number here behind this particular email, so I'm looking at a conversation that has a couple of messages in it in the inbox.

The nice thing about having a number is, I can tell if there's a conversation that's really hot that I need to jump into if I see a number like 12, or 14, or 25. This says there's been a little bit of conversation, so I'm going to open this up. It shows me the first email right now, and I can see additional emails, as well. Now, this one is in gray, and that is because it's coming from my sent items folder. I can click here, and I can see a message that I sent, so what's happening in this view, is it's consolidating not just emails from my inbox but actually every single email in this mailbox, whether I sent it, whether Colleen sent it.

As long as it's not in the deleted items folder, or deleted, it will show up in the conversation view. Every message that is not residing in this folder is italicized, whether it comes from sent items, or from a folder that I've created somewhere. The opposite of italicized is something called roman. If it's not italicized, then it's here in whatever folder the current folder is that I'm looking in. The cool thing here is, I don't have to switch back and forth from my inbox to sent items to be able to see this entire conversation. I can go from one email to the next and see that there's four emails.

Close it up. I still have two unread emails in this conversation. Let's take a look at what our options are. Our settings for conversation view. The first says show messages from other folders, and you can turn this off. If I turn that off, and I now expand this, all I'll see are the two messages in this folder, but I would encourage you not to do this because what's exciting about this view is not only that it clumps messages together, but that it will show the messages from the other folders. The second choice is show senders above the subject. Actually, whether they appear above or to the side depends not just on this setting but on how much space I've provided here in the information viewer, so this one doesn't matter that much.

The third is always expand the selected conversation, so if I turn that choice on, and I click, then my conversations will automatically be expanded, and then finally, I could have what's called the classic indented view, and if I do that, it resets the whole folder, so we're going to scroll all the way back down, and you'll notice then that each item is indented a little bit further from the first. If you like that view, that's fine. If you like the expanded selection, that works as well, but that's where you'll find your options.

Sometimes, when you're out of the office, you come back, and you start answering things in your inbox, and you send a message, and then you realize, "Oh, there was something more, "I didn't see it." Conversation view helps you prevent this by providing you with the information that you need, not in the form of individual messages, but conversations as a whole. This makes it easy for you to see what conversations are here, to choose the most recent message in any conversation, to be able to reply to it. Conversation view is one of the best features for email review in Outlook 2013.

Find the Outlook 2010 version of this course here.
Topics include: