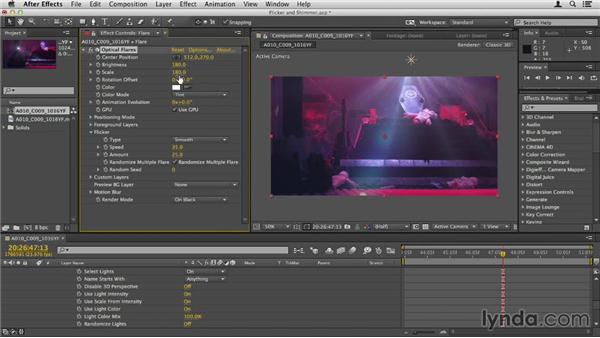 Now we're going to add some flicker and some shimmer to your optical flares. Now when I first started playing around with optical flares when it first came out, I was a little bit confused by flicker and shimmer. I guess maybe I'm kind of ignorant about light stuff. I just didn't know the difference between the two. So we're going to talk about what they are, and how to use them in optical flares. First, let's look at our scene here. At this little shot of this cool scene that I made with some Lego's and skeletons and stuff. And we have this a, a tract with the 3D camera in After Effects, and I also have a light up here that is also in our scene.

You can see it following along with the camera because there's actually a spotlight pointing down on this coffin at the top of this big structure here. Now we have also optical flares here. It's not really doing anything. It's in screen mode, so it's blending, but everything else is just at its default settings really. So, let's go ahead and go to the Positioning mode like we did in the last movie and change the source type to Track lights. And now we have this cool flaring kind of coming down from the top. And let's go ahead for right now and just increase brightness a little bit, and maybe scale a little bit, just so we can kind of tell what's happening there.

Very cool look. Now, let's go ahead and open up the Flicker area in the main part of the Optical Flares plug-in, while you're in After Effects here, not in the Options area of Optical Flares. Now you see here, we have tons of settings for flicker. And the thing is that you need to remember about flicker is that you, there's a lot of things you can do here to make this not work still. It's kind of hard to get this to show up. So I'm going to increase speed from zero, and sometimes that makes flickers and stuff like that show up. Still not working, though. Let's go ahead and increase the amount a little bit.

And, that's still not working. Well, in this case we actually have to turn it up a lot in order to see this working. So I'm actually going to overdo this, just so it's really, really excessive, so you can actually see what's it's doing. And what it's going to be doing here, there we go, now we're getting some flicker. So it's basically going to, see it's going through the RAM preview there. Now what it's doing is flickering the light. It's taking the brightness, the intensity of the light, and randomizing it. It's almost like the brightness value has a wiggle expression on it.

Now that we can see what it's doing, let's go ahead and tone it down. I'm going to take this down to maybe 35 each for the speed and the amount. And we'll go ahead and preview this again. I think it's going to be, just, just judging from the RAM preview, I think it's going to be a little bit more what we're looking for. There we go. That's creepy without being overdone. I kind of like the speed of that. I'm not sure the amount is right. I think the amount is flickering often enough, but maybe a little bit too much, so I'll probably take this down to maybe 25 and we'll call it a day there.

I also might want to scale this up just a little bit more. Now, let's talk about what shimmer is, because shimmer is something completely different than this randomization of the intensity of the light. I'm going to go ahead and go into the Options area. Before I do, I'm going to go ahead and turn off Use GPU. We'll talk about why that is at the very end of this training series in the goodbye movie. I don't want to waste time with that right now. I'm going to click Options and open this up. And I'm going to scroll down here, and we have a spike ball. And if we scroll down through the settings of our spike ball, we have animation controls.

These animation controls control the shimmer. It probably should be called shimmer controls, but it's just called animation controls. And again, we don't really see any results until we increase the speed value. So let's take that up relatively high, to about 50 or so. And what shimmer's going to do is it's going to kind of randomize the rays of light here, as if the light was kind of flickering, or maybe not even flickering, but maybe the stuff passing in front of the light was kind of moving around. And there was this brilliant preview built in to the Preview window.

When you actually have shimmer on a flare, you actually just click and hold and you could see the shimmer happening. It's a little toned down. I want to take this up to about 100 for each of the speed and amount, so that way you could really see what's going on here. I'm going to again click and hold on the flare, and now we see that shimmer. So again, see varied randomness in the rays coming off of this spike ball, and that's what shimmer is. And that's why it's different than the flicker, which is, again, randomizing the intensity of the entire flare.

It should also be noted that spike ball is not the only thing that has shimmer controls. If we add shimmer, obviously, as you might expect, there are shimmer controls for the shimmer object. Now as we click and hold, we get all kinds of really cool shimmer. You can see how easy it would be to create maybe an underwater scene where you have this kind of, like, shimmering rays of light. Yeah, go ahead and click OK here. And now I can definitely tone down the brightness. Maybe tone down the scale a little bit until we get the flare the way that we want it.

And now as we preview this, we have this really cool flare that moves along with our lights, and also flickers on and off, and also has this cool shimmer, as if there's some kind of, maybe a trap door or something like that's kind of blocking the light, maybe some dust that's blocking that. I also might want to actually go ahead and click the color swatch and add a slightly blue, a little bit more bluish, there we go.

And there we go. And that blends with our scene a little bit more. Maybe it's a little bit too much blue, but eh, it looks pretty awesome. So that's how to apply flicker and shimmer to your optical flares

10/28/2013
Lens flares are ubiquitous. They're in commercials and promos, TV shows, and feature films. And most of the time, those flares were created with the Optical Flares plugin for After Effects.

Learn how to create your own visual effects with Optical Flares in this course with Chad Perkins. After examining how actual lens flares work in the real world, you'll explore the core features and presets you'll need to create professional lens flares. Chad also gives you a look at integrating these flares with the 3D environments in After Effects, as well as how to create your own custom flares from scratch. Plus, learn how to add animation, obscure flares with layers, dynamically trigger flares, and use them in realistic scenarios like motion graphics, lower thirds, and beauty shots.

This course was brought to you by Chad Perkins. We are honored to host this content in our library.
Topics include: