Import folder structures from the Finder 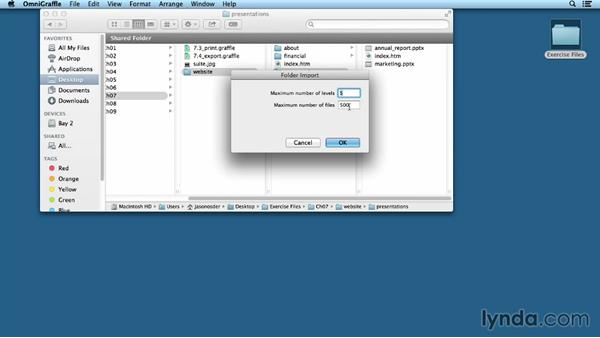 This next one really qualifies as somewhat of a OmniGraffle trick. What we're going to do is import a directory structure, that is, a bunch of nested folders and documents, and bring it right into OmniGraffle, which is going to diagram that structure. It's a little bit esoteric, but if you have a good use for it, such as a prebuilt website that you have to reverse engineer into a sitemap, watch how quickly this goes. I've created a file structure within our exercise files. So, here in chapter seven, you see there's a whole folder that's just called website.

And it's a fairly straight forward website with a secondary layer of directory structure and then a number of files down at the end of that hierarchy. So, you could see here, if you were building this website to begin with, that you would be making a site map to map all of this. But what if it is already built and you haven't make that site map? Well, watch what happens when I drag the entire folder to the OmniGraffle icon on the dock and I get a choice here about how many levels I want to go deep so that is levels of the hierarchy.

And how many files I want to deal with as the maximum. And this is not a terribly large file structure, so I can leave these as is. We're not going to hit either one of these limits. We've only got, let's see, one, two, three levels and probably a maximum, we've probably got less than 15 total files. So, just click OK. As you can see, OmniGraffle has opened up and it is actually diagrammed as a hierarchy all of these files automatically. Now, granted it doesn't look too good yet, but there is where you start to tweak, so I'd probably take this tertiary level.

And just bring it apart like that. I'll start to space these out, and I'll tell you what I really like are that these icons come in based on the file type. I think that's pretty attractive to begin with. I would, obviously, keep tweaking these so that lines don't run into labels and things like that, but we've actually learned all of those techniques, and they'll all apply here. The only thing that's different is, instead of building from scratch, we were able to quickly create this structure by importing the entire directory structure in one step into OmniGraffle. 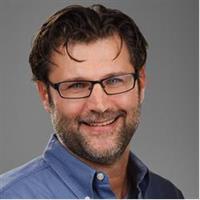 4/21/2014
Translate your ideas into polished diagrams anyone can understand with OmniGraffle, the flexible diagramming application for the Mac. With this course, you'll be able to create org charts, space plans, wireframes, presentations, and much more. But first, learn the basics with author Jason Osder, as he demonstrates how to construct diagrams with shapes and lines, and save time with reusable graphics called stencils. Then dig into advanced topics such as drawing your own custom shapes with the Pen tool, adding logical section breaks in multipage diagrams, and notating hierarchies with the Outline sidebar. Last, find out how to print and export projects and take a look at the capabilities of OmniGraffle Pro, including tables and interactivity.
Topics include: