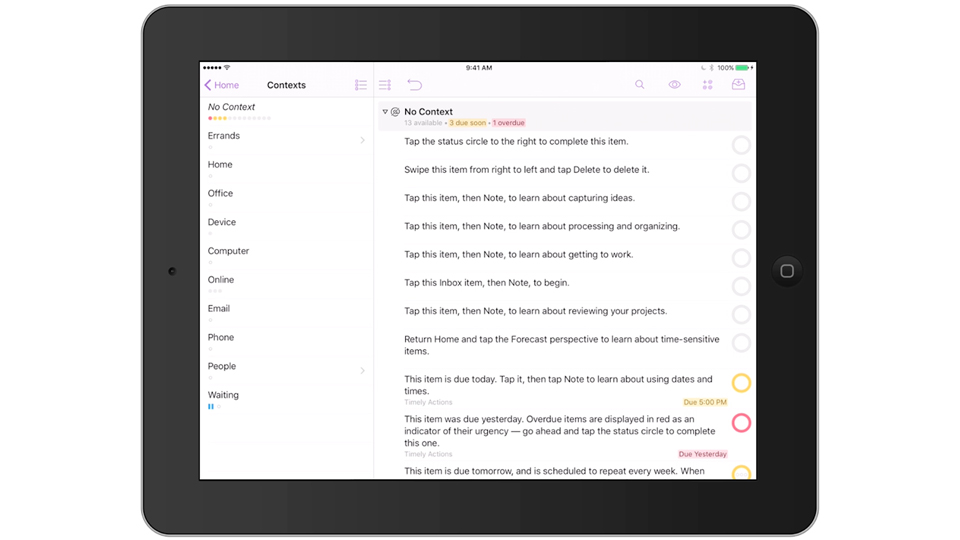 - Context provide another basis for organizing your tasks. Unlike projects which group tasks around a common goal, contexts group tasks around some other focus like a place for tasks you can leave at home or certain person like tasks that require the assistance of a co-worker. Or even a thing, like tasks that require you to be sitting behind your Mac. Some users set context around their energy levels. So they can specify tasks that fit for high or lower energy times of the day. Context provide a powerful way for you to view and perform tasks in OmniFocus.

To create a new task in OmniFocus go to the Context Perspective and then tap on the New Context button. I'm going to go ahead and tap on it now and create a new context and I'm going to call it Technology. And this would be a context I use for things that I need my Mac, my iPad or my iPhone to get done. I'll go ahead and ta the Save button and now I've just created that context. And I can even create sub-context within that. So if I want to add something under Technology you can see that the New Context button has just turned into the plus sign because I have it selected.

I'm going to go ahead and tap that and then it's going to say, do you want a new context under Technology? And I'm going to say yes. Tap that and I'll have one for iPad. And I'll go back and I'll add another for iPhone. I'll go back and add one more for Mac. So now I've created three sub-context under Technology. So there may be some instances where the proper context is working on my iPad versus the Mac.

Now I can select that. If I go all the way back to the main screen and go to Context again, I can add another root level context and I'm going to have one and I'm going to call this one Internet. And this is things that I can just do on the Internet. So sometimes I have things like that. And I'll also have one for Mail. And you could group this under communications context if you wanted but I'm going to keep it as a separate one. And for me mail includes email.

And you can see where I'm going with this. What if I have a certain person I work with? Lets say I have an engineering department at my evil genius company. I'm going to call it Engineering Department. And now that I have this context activated, if the engineering department people come in my office I can just go to this context and see all the tasks that are related to them. Again, I can rearrange these if I want. I just hit this button and then I can drag them up and down. I could also delete them. When I'm done I tap the Done button.

Another good example of context is your family. I have context for my wife and my two daughters. So if I'm with any one of them and I have some question or issue I need to work with them on it's in an OmniFocus task. I go ahead and tap on their name and context and I have a list. Yes I'm that nerdy. Anyway, for some users adding context to tasks is a new thing but don't let it intimidate you. Context in organization is a powerful tool. I remember once when the Internet went down in my office and while everyone was freaking out I switched over to my telephone context and just answered calls for several hours.

By the time I was done with my phone calls the Internet was back up and I went to work on the Internet context. So you can see how helpful this can be. 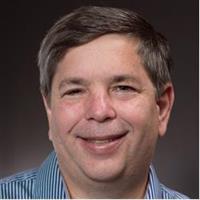 1/20/2016
Master the intricacies of OmniFocus on iPhone or iPad to supercharge your productivity. You'll explore the popular iOS task manager's organizational conventions and the best ways to navigate the interface. You'll also dive into capturing tasks in a variety of ways, including writing tasks from scratch, speaking to Siri, using OmniFocus extensions, and utilizing Mail Drop to speed up task entry.

The course then explains how to best process tasks: setting up projects, establishing contexts and repeating tasks, and using such important features as date deferral, flags, the check circle, perspectives, and the Forecast view. Finally, you'll learn how to efficiently review tasks and projects and how to manage OmniFocus tasks on an Apple Watch.
Topics include: