What you need for this course 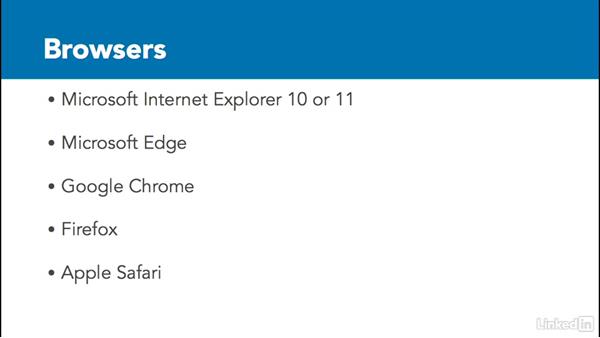 If you're running an earlier version of Internet Explorer, it's not necessarily supported for SharePoint, so if you're using Internet Explorer eight, it might not work. You can also use Microsoft Edge, which premiered with Windows 10. That's a fine browser for SharePoint. With the other desktop browsers, we're looking at whatever the latest version is, the current version. For example, the latest versions of Google Chrome, of Mozilla Firefox, or Apple Safari. All work with the current version of SharePoint. But if you looked at older versions of Apple Safari, for example, older versions of Firefox, those might not work, might not be supported at all.

Often what happens is, some things will work, but something won't. So as we look at this browser list, in all cases we're being asked for the latest version, or in the case of Internet Explorer, versions, of whatever browser it is you're using. And this is the set of supported browsers. You might say, well, what other browsers are there? There are lots of other browsers, but these are the browsers that are supported for SharePoint. In other words, these are the browsers that SharePoint has tested against. So if you choose to use a browser that's not on this list, it may not work well with SharePoint.

We also have the ability to use SharePoint on a mobile device. For example, I can open a SharePoint site from my iPad, or from my tablet. So we have mobile browsers that we also want to look at. For example, if you are using a Windows phone, you can use either Edge, or Internet Explorer, whatever version would run on a Windows Phone 8.1. If you're using Apple, iPad, or iPhone iOS 8 or later, then you can use either Safari or Chrome.

And if you're using an Android device four point four or later, then you'll want to use the appropriate version of Chrome. If you'd really like to work along with me, and you don't yet have access to SharePoint, consider a SharePoint online subscription, perhaps as part of your Office 365 subscription. You can often go to Office.Microsoft.com, and get a free trial of SharePoint or of Office 365, or a short term subscription, so you can evaluate this great collaboration platform for yourself.

7/28/2016
The most powerful features of SharePoint—file sharing, site collections, team sites, and more—come bundled with the on-premises edition, SharePoint 2016. This course delivers essential training on SharePoint Server 2016, teaching viewers how to best use SharePoint 2016 for business collaboration and real-time documentation sharing. Gini Courter shows SharePoint site owners and members how to create, edit, and save documents; create and use team sites; work with libraries and list apps; build site collections and sites; integrate SharePoint with other Office apps; manage permissions; create workflows; and work with content types and documents.
Topics include:

Video: What you need for this course