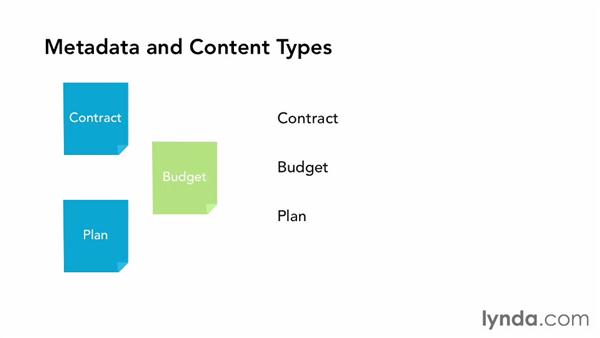 We've been creating libraries like this one, our Documents Library, and adding Metadata columns to those libraries. We're really comfortable doing that. So, this one has a category in it, for example. And we have an Employees Table. And in our Employees Table, we have lots of custom columns of data. So, we could have started with our Employees List by beginning with a Contacts List and then adding the other columns. And then, when we have an Employees Table somewhere else, we could add the custom columns there. Just as when we recreate this Document Library, we might decide that we need to have a category always, that we're going to categorize our documents. And so, each time we create a library or create a list, we add new columns of custom data.

Long before you find yourself doing that, I hope you're watching this movie about Content Types. Because, what a Content Type does, is it creates a type, like a document but very specific to our enterprise. So if, for example, we believe that every document should have a category, and that there's a select set of categories we would work from, we could create a Content Type called R Documents. And R Documents could have category Metadata already attached. So, every time we create a document library, we simply say, Use Our Documents Content Type and we don't have to add Metadata to it. So, a Content Type is a happy integration of Metadata along with whatever our document or list is.

Let's go look at another example so that we know how useful this is. So, if I look in my Document Library, there are three documents, two Word documents, one Excel document. That's one way of thinking about the documents by file type. But the documents are something more than that. If you were to ask me, what documents are in your Document Library, and I said, a couple Word docs and Excel spread sheet, you'd say, what are they good for? What's actually in them? Because that's only a small piece of the Metadata. And I'm going to say, well, I've got a contract, a budget, and a plan sitting in there.

Now, it might be true that some of our contracts are done in Word and some of our budgets are done in Word and some of our plans are done in Word. File Type and Content Type are not the same thing. I can use whatever tool I need to create a project plan. I've done some in PowerPoint, for example. So, I can't simply say if something happens to be in Excel, it's probably a budget, or if it happens to be in Word, it's probably a contract. This is an entirely different piece of Metadata, which is, what kind of information is in there? So, let's imagine that I have this Finance Library created and I want to know what category to place each document in.

Well, we can add a Metadata column, that's what we've been doing up until now and I could have choices on it like contract, budget, and plan. But it's a little more complex than that because there's different Metadata I want to track for a contract versus a budget versus a plan. For example, if I have a library with contracts in it, I'll want to know what company it is this contract is being written with. Who's reviewing the contract and when was it reviewed, and when is the effective date of the contract. So, those are the kind of pieces of Metadata I'd like to have for a contract. I want very different Metadata for a budget.

For a budget, I want to know the fiscal year. I want to know the scope of a budget. Is it enterprise wide, is it for a division, is it for a particular store? And I want to know who owns this budget. One way to address this is to say, okay, here's what we're going to do. We're going to create a document Library for contracts and we're going to create another document library for budgets. And we'll assign those appropriate Metadata columns to those particular libraries. But that's the long way around the block. The fast way is to notice that we actually have two or three different types of documents that we might want to store in a library. One type might be contracts, one type might be budgets, and one type might be plans.

And there is one more reason that we want to think of it this way. Because what's true is, we really don't want the library to have metadata, we actually want the document to have Metadata. So, by defining some extra information, what we're going to do is actually create a type of document that is called a Budget, that has corresponding Metadata for fiscal year, scope, and owner. Were going to create a type of document called a Contract that collects Metadata for company, for when it was reviewed, who the reviewer was, and the effective date of the contract.

One more bonus then. If I take one of those documents and move it to any other library, its Metadata will go with it even if those columns don't exist in that library. Because the Metadata isn't attached to the library, it's not in a custom column, it's attached to the Content Type that that document was created in. So, this is really exciting stuff. When we start imagining how we're going to keep track of documents, what Content Types allow us to do is to recognize what's real in a business.

When you hold a document in your hand, it's not just a Word doc, it's not just a PowerPoint presentation or an Excel spreadsheet. It's actually a specific type of document. And based on its type, we're going to do something different with it. If it's confidential employee data, I'm going to make sure that it's secured. If it's a document that has to have a long shelf life because we have to retain it for legal reasons, I'm going to treat it differently than I'm going to treat a few notes that were collected on what we might do at the company event.

Content Types are one of the most powerful features of SharePoint. And if you're relatively new to SharePoint, or if you have an increased role in your SharePoint environment, spending time understanding what content types are, how to create them, and then working with them, will be time well spent.