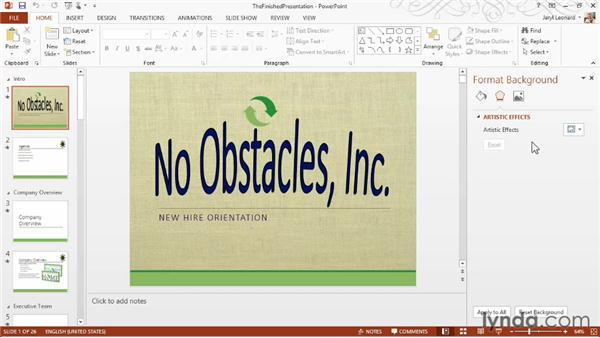 Welcome to the main view of PowerPoint. Now, before I even begin talking about slides and content, let's go through the interface of PowerPoint so that you can become familiar with the technology and terminology, and you'll know how to find the right tools that you need. Now I'm going to be telling you about what all these things are called using the right terminology. So that even if you have to go to the Help file, you'll know how to look things up, and it's going to be very helpful to you. So, we are going to start right at the top and go clockwise. Way at the top of the screen we have what's called the Quick Access toolbar.

Now it's called a Quick Access toolbar, because a lot of these other panes and windows, you'll notice, will change according to where you are. The Quick Access toolbar will never change, it will always be in place for you. Now right below that we have the ribbon. The ribbon is a tabbed interface used in all the Microsoft Office products. Now it's designed to help you find the right tool when you need it. We will be going over how to use this in a lot more detail in another chapter. Way over here on the right, we have what's called the Task pane.

Now this is going to change according to what you are in also, and it might not even be there. In fact, it's going to be your choice. You can close out of it, and bring it back up if you want it. The things that are in the Task pane are actually the exact same things that are in the ribbon, and it's just going to be up to you which way you like to use it. Way down here at the bottom in red it's called the Status bar. It tells you current things about the slides you are in, such as what slide you are on, whether it has any NOTES or COMMENTS, what view you are actually looking at the slides in, and you can even zoom in and out of the slides to see things better.

Over here on the left, we have what's called the slides tab, and this actually called Normal view. What ever slide I've actually clicked on, it's going to appear in the slide pane, this is the middle, and it's where your slide is actually shown, these are what your audience is actually going to see. I can click on the slides, and it changes things around, I can see each slide. You'll also notice that the Task pane is changing too. I can close out of that and have a much more workable area. I'll show you how to get it back later when you talk about the ribbon.

So, now that you know your way around PowerPoint. Let's actually start building some presentations.

2/8/2013
In this course, author Jess Stratton teaches the basics of creating, editing, and sharing presentations with Microsoft PowerPoint 2013. The course shows how to build a slideshow from scratch, or leverage PowerPoint templates and themes for quick construction. Jess shows how to add and edit text, images, graphs, video, and animation; format slides for consistency; and add speaker notes to ensure a smooth delivery. Plus, discover how to collaborate on changes and then share the final presentation via print, video, PDF, or email.
Topics include: