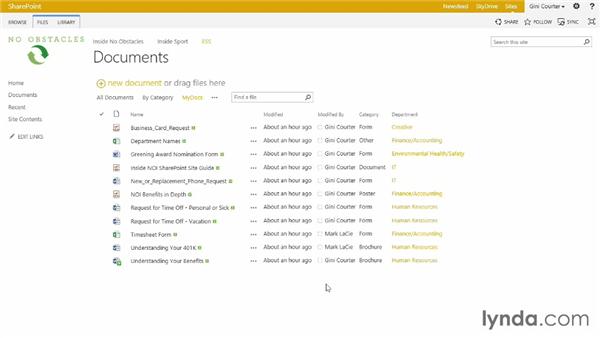 I could even make it a personal view, so that only I would see it, and no one else would. And when I could quickly move to the only Gini view, they'd all be amazed and they'd say, wow, I wish I had a view like that. And Mark would want a view, and Akhi would want a view, and Gerald would want a view. And sooner or later, everybody would want their own view. And they'd be creating them or they'd be asking the IT support staff to create them. And we'd have 700 views for our 700 employees. There's an easier way. I can create a view that says, let me see who it is who's logged in. And let me then show them the documents that they might care about. This kind of view is called a Dynamic view, and it's incredibly powerful. Because it gets us out of the business of creating several views for different individuals.

So I'm going to go that only Gini view real quickly, and modify this view. And one of the choices is to delete it, and I'm just going to get rid of it. Now let's create a view that will pay attention to who's logged in. Let's create a new view based on all documents. Good reason to keep it around and this view is going to be called Mydocs. Now when you say my the assumption is that its actually focused on one user.

If we were looking at a page called my, or a list that included the word my. There would also be the newUNKNOWN that would be something that user could customize. In this case they can't, were creating it for everyone. But it's still a good thing to have, and I'm not going to make this a personal view because then only I could see it. It would be like that special Gini view. We're going to create a Public view and that way we're going to create a Special view for every single user who can log in. Because I used the All Documents view as my starting point, my documents are sorted by name already. All I need to do is filter.

So show items only when the following is true. When modified by is equal to me. Now that me goes in a set of brackets not parenthesis. Not braces. If you forget anything about how to use me as a variable in a view. You'll find some help about it right here on the left. This would show me documents that I modified last. If I also want to be able to see documents that I created. Then I would also have to say, oh it's true that created by is equal to me. When a view includes me as a filter, what SharePoint does is it looks up and says who's me? Gini Courter, got it. Let me go ahead and click Okay and there's the My Docs view applied. Notice that there's some documents here that other people modified. That probably means that I created them to begin with. What would happen if someone else logged in here? Well, let's go take a look.

Let's have someone else log in, and see what their experience is, of this particular view. So, here we are in another browser Window, and Mark LaCie is logged in. So when Mark goes in, and chooses My docs, Mark only sees documents that he created or modified. That's how this view works. SharePoint says, who's me? Mark LaCie, and shows him this particular view. Now there's another variable that we can also use to create a Dynamic view and it's a time based variable. Let's go take a look at how we can use Today, as a variable in a view. I'd like to create a view that would show me documents that were either modified or created recently.

Let's say in the last three days. How do I choose three. I've got a lot of documents coming in this library, so. I don't want to have a list of 50 new documents. Just a few. It might be that if I have a library. Where there aren't as many new documents. I might say, documents added in the last week or documents added in the last month. It works the same, no matter what duration of days you choose. Let's go ahead and create a new view. And I've been going here to the call out to do that. But remember that you can always go to the library, and say, I'd like to be able to create a view.

First documents created in the last three days. Well that would be created is greater than or equal to today minus 3. Now if I leave a space in here, I'll actually get an error when I save this. It's a formula just like in Excel, we don't throw any extra spaces in there. Or, where modified, is greater then or equal to, now if I just chose greater than, I would only see documents that were exactly three days old.

Greater than or equal to gives me the last three days, today, Minus 3, okay. And here are all of the documents that have been modified or created within the last three days. So if we visit this document library in a week and nothing new has been posted then we would expect that new three docs would show us nothing. New three docs isn't a great name so, I'm going to go back and modify the view. And the view name is New 3docs, and the web address includes New3docs. I'm simply going to say new and past three days okay, looks good. So, Dynamic views created using Me or Today, are powerful ways that we can filter information.

I don't need to make a view for January, February, March, and April. I can simply make a view that says, created in the last 30 days. And I will always see that, no matter what month of the year it is. I don't have to create a view for Gini and a Akhi and Mark, I simply need to create a view that's My Documents. A view for me, and it will work for everybody. So today and me, two really powerful ways that you can create Dynamic views in SharePoint 2013.