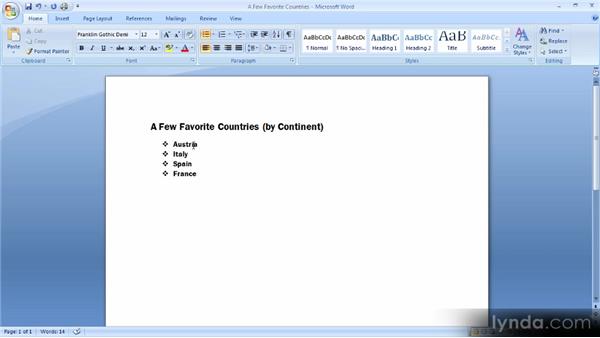 When a document includes a list, there are a variety of ways that you can Format that list. These include Bulleted lists and Numbered lists, primarily. Let's take a look at how we can put these options to use. I'll start off by clicking down below my heading, here, and I have a document where I'm intending to create a list of some of my favorite countries. And I plan to list them by continent. I'll go ahead and start off just by typing some of my favorite countries. I'll start off with Austria, for example, and then perhaps Italy and maybe Spain and France. So, I'll just type a list of countries in this case. And then I realized that in might be helpful if this list stood out a little bit.

So I'll go ahead and Select that text, all four lines, in this case. And with that text selected, I can then click on the Bullet button in order to turn it into a bulleted list. In this case, it's perhaps a list of my favorite countries, but not necessarily in order from most favorite to least favorite. If the list is in order by preference, then I might want to use a numbered list. And for that, I'll simply click the Numbered List button, and now you can see that the list is indicated with numbers 1, 2, 3, 4, rather than a simple bullet symbol.

But we also have some options for how this list is formatted, I can change the symbol that's used. So, here I have a numbered list, for example. If I click the popup associated with the Numbered List button, then I can choose formatting for that list. So, for example, I can use Roman Numerals or I can use Letters to represent those items on my list. I'll go ahead and change it to numbers with parenthesis, for example. And you can see that the update effect the list immediately. And I have a similar option for the bulletted list.

I'll go ahead and click the popup associated with the Bulleted List button. And then you can see that I have a variety of options available, including circles or little arrows symbols and I can also define a new bullet. Essentially choosing, any letter of the alphabet or any symbol of any of my fonts, as a bullet that I can use for my list. We can also take things a step further though. You may have noticed, I've indicated in my title here, that this should be a list by continent. Now, all of the items on my list are countries in Europe, and so I could specify Europe at the start of the list here.

I'll go ahead and type Europe and then press Enter, and now Europe is a heading, as it were, it's at the top of the list. Except it doesn't exactly stand out from the other items, and that's because they're all at the same level. But I can promote or demote items on that list so that their at different level. I'll go ahead and select the countries, for example, and then I'll click the Indent button. And you'll see that those items, those countries in this case, are indented, and they also get a different symbol. So that it stands out as not being part of the same list.

In other words, I have a heading here and then I have some countries listed under the name of the continent in this case. I'll go to the end of the list and then I'll press Enter. And you'll see that I have a new bullet item so I can add an item to my list. But in this case I'm ready to switch to a different continent. And so I want to shift to the left, I can click a button to decrease the indent but I can also use keyboard shortcuts for this purpose. When I'm working in a bulleted or a numbered list I can press Tab to indent and Shift+Tab to decrease the indent level.

So for example, at this point I could type South America, and then press Enter on the keyboard. And press then Tab to indent, and I can start typing some of my favorite countries, from South America. If I press Enter again, you'll notice I have another bullet item, so I could add additional countries to the list. But with that empty bullet or that empty number, but if I press Enter one more time, then I go back in this case to the top-level bullet item. But if I go one more time again with the Enter key, then I get to a new line, and I'm no longer in that bulleted list.

Either option works perfectly fine and the result is an organized list with very clear formatting.

2/7/2013
In this course veteran trainer Tim Grey teaches you how to use Microsoft Word for Windows 2007. You'll learn your way around the interface; explore basic tasks such as creating, saving, and opening documents; and find out how to format your text with font attributes, page and paragraph formatting, templates, and styles. You'll also see how to use tables in your documents, add and format images within a document, review and modify documents, and of course print and share the final results.
Topics include: