Coauthor in Word and PowerPoint 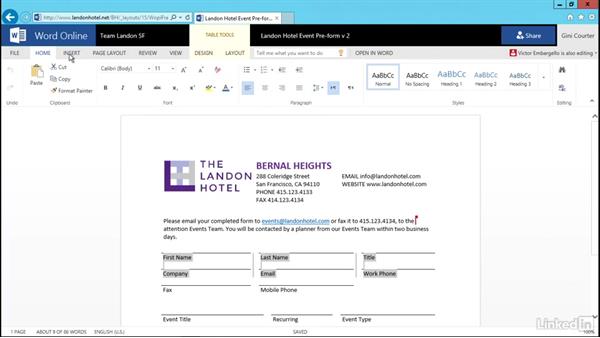 - [Voiceover] If your organization, like most organizations, creates documents that require collaboration, you're going to love co-authoring with SharePoint and Office. Co-authoring is Microsoft's term for simultaneous editing, editing by more than one person at a time in a document. SharePoint 2016 supports co-authoring. Co-authoring also requires one of the newer versions of Office, Office 2013 or 2016, whether they're stand alone or you're using them as part of Office 365.

This is how it works. I'm in my document library, and I'm going to open the Landon Hotel event preform. It opens in Word Online, that's fine, and I'd like to edit this document. I'm going to actually open it in Microsoft Word. We have this dialog that asks if we run into trouble. It's not there because you have, it's there in case you do, so don't jump into that dialog right away. We'll just give it a moment. And I'm editing my document. At the same time I'm editing, someone else is editing this document as well.

As I begin modifying the document, for example, adding some text at the bottom of the document, you may notice that the text that I'm entering is bracketed. That's because this portion of the document is locked off from any other user. And it's a clue that I'm not editing alone. So is this message in the status bar, that there are updates available, and if I click to get those updates, I'll get changes that have been made by other users.

It says, when you save, Word updates your document with the changes made by others, and I can find them by looking for a green overlay. If you don't want to see this message again, that's okay. You can turn that off, but I'm going to leave it. So these are the items that have been modified by another user. If I want to know who else is working in my document, notice that it shows me that there are two people working right now and it says little person, two. If I click the button, it shows me that Victor is editing, so I know who else is here.

I'm going to save the changes that I made. Victor would then be able to see my information, and let me show you what his experience is like, because Victor is not editing this in Word. Victor is editing in Word Online. If I continue editing in Word Online, notice that this works as well. I can see that Victor is also editing, and it occasionally tells me where he's editing. The little flag shows me where he is editing, and that happens as soon as the screen is refreshed, so that I see the changes he's made.

In Word Online, he'll see a flag for me just as I see this red flag for him. When I'm all done with this document, I can simply leave it. I've made the changes that I want to make. Remember that I'm saving all along, because I'm working in a browser, so there's no need for me to save this document. That's happening automatically. If I go back to Team Landon, then Victor will see a message that says Gini Courter is no longer editing this document. And he will then be editing the document by himself.

I can co-author the same way in PowerPoint. If I go to our library and open, for example, the Landon Mix, and choose to edit it, and since we're having this great demo, I might even call Victor and say "hey, would you open that Landon Mix for me so I can show folks what this look like?" And this is the Landon Mix that we used at our employee orientation. Victor is looking at this document right now, but that doesn't affect the share button at all. It's only when he moves to edit it, whether in PowerPoint Online, or in the desktop version of PowerPoint, that this share button changes.

I get a number and an alert that says Victor Embargello is editing this document. And all he did was switch to edit mode, and I will see that even before he's changed anything. When I was co-authoring in Word, Word is using paragraphs, and if I'm in a table cells to determine what should be locked for editing by each of the co-authors. In PowerPoint, co-authoring works at the slide level, so that if I'm working on slide one, I have the ability to edit on that slide, but no one else can edit the slide at the same time that I am.

If I'd like to see where Victor is in the document, I can click his name to see where he is editing, or if he's not editing immediately at that time, and he only has a slide selected and hasn't begun editing, then I won't necessarily know where he is working. But if he attempts to edit in the same slide I'm attempting to edit, for example, in slide three, then he may not be allowed to edit if I'm already editing there. Victor's all done making changes to this document now, so he's told me he has a meeting and he's going to leave.

After he leaves the document, I will get a notification notice Victor Embargello is no longer editing this document. I can click the share button to see who's still here, and essentially nobody, but it's an easy way for me to invite other people or to send the document as an attachment. This share feature is nice in Microsoft Office. Co-authoring is an evolving and expanding feature. Co-authoring originally in Word and PowerPoint was only in the desktop versions.

Being able to also co-author in Word Online and PowerPoint Online is really fabulous. And it's not even necessary, as you noticed, that the co-authors be using the same platform. Someone can be co-authoring in Word on the desktop. Someone else can be co-authoring in Word Online. When we're all done with the document, all we need to do is save the document. And the fact that we've been editing at the same time has simply allowed us to compress time. If we're working on a presentation or a document under a timeline, it's nice to be able to have people who are reviewing the document, working on the document at the same time as people who are still making some changes to the abstract, or updating references, or even working on new sections of body text.

7/28/2016
The most powerful features of SharePoint—file sharing, site collections, team sites, and more—come bundled with the on-premises edition, SharePoint 2016. This course delivers essential training on SharePoint Server 2016, teaching viewers how to best use SharePoint 2016 for business collaboration and real-time documentation sharing. Gini Courter shows SharePoint site owners and members how to create, edit, and save documents; create and use team sites; work with libraries and list apps; build site collections and sites; integrate SharePoint with other Office apps; manage permissions; create workflows; and work with content types and documents.
Topics include:

Video: Coauthor in Word and PowerPoint