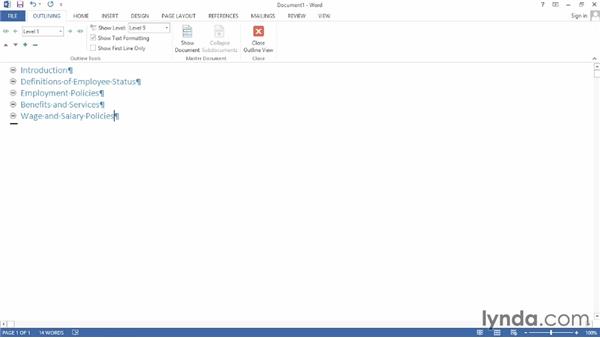 - Microsoft Word's Outlining feature makes it easy to create a framework for your long documents. A sort of skeleton made of headings that you flesh out with body text later on. Outlines are a great way to compose a long document because they enable you to list the headings you want to include, shuffle them around, and insert additional headings or subheadings wherever you like. This makes it easy to organize your thoughts before writing. If you haven't tried Outlining as the first step to creating a document, you should.

In this video I'll show you how to get started using Word's Outlining feature to create the framework for the document that we'll be working on throughout this course: An employee manual for a fictional company called "Two Trees Olive Oil" Along the way I'm sure you'll see how you can apply the outlining feature to your work. Let's get started by creating a brand new document. If you don't already have one showing, press ctrl + n to get one. To work with Word's Outlining feature, you need to be in Outline view. Click VIEW and then click Outline.

The screen changes to show the Outlining ribbon with its tools. The blinking insertion point appears at the top of the document beside a circle with a minus sign inside it. If you look at the Outlining ribbon you can see that you're at level one. Anything you type now will be a level one heading. When I create an outline, I like to start off by listing the top level headings. For a book, that might be chapter names. For a white paper it might be the topics that need to be covered.

Top level headings are main topics. The document that we're creating is an employee manual that includes the information for the employees of Two Trees Olive Oil Company. Our document will be divided into various parts. The first part is an introduction, so let's start off by typing in that. Notice that as you type, the text appears as a heading. That's because it is a heading. When you're finished typing, press "Enter" to go to the next line. Word creates a new paragraph at the same heading level.

The next section will be for definitions of employee status so I'll type that in. Because you're typing in actual headings that will appear in your document, you should type them the way you want them to appear in your final document. I like using what's called title case for my headings. Title case capitalizes the first letter of important words but leaves other words such as articles and prepositions in lower case. The way I've typed this is a good example. Now you don't have to use title case in your headings.

You can use any kind of capitalization you like. Just keep in mind that the way you type it in here is the way it will appear in your document and of course you can always go back and edit it. Let's press "Enter" and continue. We need a section about Employment Policies so I'll type that in and then press "Enter". Next is Benefits and Services. And the next one is Wage and Salary Policies. That's enough for now, you should get the idea.

Now let's start typing in some of the subheadings under these items. You can do this in any order that you like. Since I know a bunch of words that I want defined, I'll start with that second section of definitions. I'll click after the word "Status" and press "Enter" to get a new line. Note that the new line is a level one heading. If I wanted to insert another level one heading here all I'd have to do is type it in, but I want a level two heading. There are a few ways to demote that heading to level two.

One way, which is the way I prefer, is to simply press the "tab" key. The line becomes indented, which is pretty standard for creating outlines. I can then type in the text I want to appear at that heading I'll type in the words: "Employee" Defined Note that the text appears in a smaller typeface. That's because this is the formatting for a level two heading. I can see that it's level two by looking up here in the ribbon. I want to type in another subheading, so I'll press "Enter" and type it in.

This is the word "Exempt" and I'll add another one, "Non-Exempt" and one more, "Regular Full Time" Now after typing these in, I realize they should really be level three headings, in other words, they should be under "Employee" Defined. There are a few ways that I can change the level of these headings, one way is to click in the line for the heading I want to change and just press the "tab" key. So I'll look up here under Exempt and press "tab" This demotes the heading, indenting it under "Employee" Defined as a subheading.

It's a level three heading. Note that when you're in Outline mode, pressing the "tab" key does not insert a tab character. So it doesn't really matter if the insertion point is at the beginning, or the end, or somewhere even in the middle of a line that you're changing the level of. You can also use the "tab" key to promote a heading. For example, suppose I later change my mind and I want "Exempt" to be level two again. I can press shift + tab to promote it. Another way to change the heading level of a heading is with the ribbon. With the insertion point anywhere in the heading line I can click one of the arrow keys on either side of the heading level menu.

The one on the right will demote, and the one on the left will promote. And as you've probably already realized, you could choose an option from the heading level menu to assign a level you like. You could also demote or promote a heading level by dragging I'll position the mouse pointer on the circle in front of "Exempt" to get a four-headed arrow. I can then press down the mouse button and drag left or right to promote or demote. I'll drag it to the left to promote it. You could do this for as many levels as you like.

Now, in my example I want Exempt, Non-Exempt, and Regular Full Time to be demoted to level three headings and I can do them all at once. I'll just drag to select them and then press the "tab" key. Of course I could have used any of the other techniques I told you about as well, that's the basics of building an outline. We'll take editing outlines to the next level in the next video. And since you're here to learn about Word's Outlining feature and not to practice your typing skills we'll work with a document that already has more of the outline typed out for us. 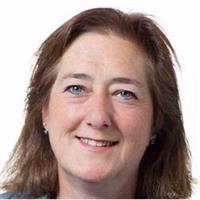 11/20/2014
See how to use Word 2013 features for authoring reports, white papers, books, and other long documents. First, author Maria Langer explains considerations unique to long documents, before providing best practices and smart strategies for planning your approach. Then see how to set up a logical, effective structure with outlines and master pages, which will help organize your ideas while automatically generating a table of contents, a bibliography, and other document elements. Find out how to add reference items such as cross-references, footnotes, and indexes to guide readers through your work, and place images, tables, and other graphics. Finally, learn about numbering chapters, sections, and pages; adding headers and footers; and formatting and exporting your final document.
Topics include: