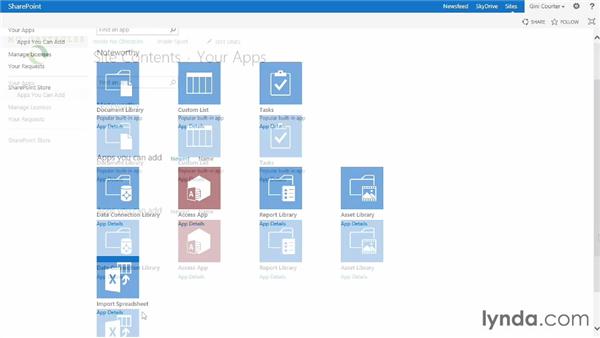 Now that we know how to use libraries and lists, it's good to know how you can add a list or a library app. to your site. So, let's start by going to site contents. And we can there, the items that are already on this site, and then other items that we could optionally add. So first you'll see everything that we're using on our site. Here's our Documents folder, our list of employees, our events list, our empty forms Templates folder, our microfeed and our announcements list and so on, and finally an app that we got from the app store, that's the world clock and weather that we'll be working with later.

So this is what we have already, the question is how do we add capability that we don't yet have, so I am going to go ahead and click add an app and this opens the list of the apps that are available for us to add and also has a link to that shared point store so we can get more apps, if there is an app that we want. That's available commercially, either for a price or for free, to use in our site. So, let's taek a field trip and see what's available. At the top, you see three apps that are listed as noteworthy.

A document library, a custom list, and tasks. Now, they're simply listed as noteworthy for every single site that's created using the template we're using here. We already have a document library. It doesn't mean that they're more useful than the others, it's simply what sits there by default. And then we have apps you can add. So, we could add another document library, and indeed we will later. We could add a formal library. We'll do that later in the course as well. Wiki pages, picture libraries. Those are all different types of libraries that we can create. But we also have lists.

We have links lists. Links are used to simply put a list of hyper-links on your site so that people can access different pages in other places. If you want to see the details of any one of these, simply click the app details, and you'll get a description, a list of web pages or other resources That you can reach with a URL. What types of other lists do you have? Announcements list, we have one of those already. And this contacts list, and the calender app next to it have something in common.

They can both synchronize to Microsoft Outlet. The discussion board is another type of list. The promoted links list is very interesting. It's a list of links that are held in common, that appear on a site, so that you have a core set of functionality. And we're going to see how that promoted links list works when we create a new sub-site later on in the course. The tasks list, like contacts and calendar, synchronizes with Outlook. We have a fabulous issue tracking app that's just amazing.

You can use if your rolling out a new product or if your working on developing some software or a process. Or if you just want people to be able to report things as they would to a help desk. Were going to look at that app later in the course. A custom list that you create either as a standard list, or in data sheet view, we'll look at both of those methods. An external list, that we're importing, a survey is a type of list. But wait there's more, there's also a library of data connections to external data.

A particular access app, a report library where we would keep reports. And asset library that's made for not just pictures, but rich media content that could be audio, video, and so on. And were going to create one of those libraries as well. And finally the ability to import a spread sheet. Which we can use an app to import it. And import a spreadsheet from excel or another similar application. Or if we start in excel, we can actually publish a table. Back here to SharePoint. And acomplish the same thing.

SOmething that we'll see later in the course when we take a look at how Excel intergrates. With Microsoft SharePoint. There are two different things that I would like to add to my site. Ones a library. And ones a list. So lets go back and pick up the lengths list. So that we can have a place. To store lengths. To information that we would like our employees to see. Simply go to links and click. You'll briefly see this working on it. You want to enter a name. Now, I'm going to say something you'll hear me say many times during this course.

When you're only offered the opportunity to be able to enter a name, that name is probably going to be converted to a URL. And every single space that we put in it, because you'll never see a URL with a space in it, will be replaced with a %20 sign, which is actually the ASCII character code for a space, %20, takes up three characters. So, what we'd like to have here is, we'd like to have new employee links or orientation links. But if I name it orientation links like this.

When this is converted to a URL what will be added will look like that. That doesn't look great, and it takes up more space. You might think not a big deal, but ultimately as we start creating libraries and then have file names in them with spaces in the file names, we start throwing three extra characters in many, many times and we can actually have a file who's name is too long for us to store it in SharePoint any longer. So, what I'm going to suggest is that we provide a short name, for example.

Or if we wanted to make sure it had lengths in it. We could just call it O links. Because this is the name, that's going to go in the URL. We'll come back later. In this chapter. And I'll show you how we can change any name. That we've provided here, once the url has been created. So here's our orientation links list. I'm going to go ahead and click create. And notice, that it's been added here, to our site contents. Now, there's really nothing in it yet, but it's already on the recent list, and we can change some settings later, to be able to modify what this looks like.

Let's go ahead, and click orient links, and see what our list is. Let's add a new length to this. Excellent. So lets say for example that we would like our employees to go look at the SharePoint site at Microsoft. We can type in a URL. Click here to test. Make sure it actually goes somewhere. That worked well. Right-click and lets go back. And then we could add some notes. For example, training and resources for SharePoint users, and click Save. And now we've added our very first item to our new list that we created. That's how easy it is to create a new list.

We need one more list. So let's charge in and create it really quickly. We're going to create a Contact's list. That we can use to add people to, so that everybody that we need to track at this level can be added. For example, a vendor that we're doing some work with right now, anybody's whose important to our team, we could put into this list. So, it's our important peoples list, let's see how easily we can create this. Go to Site Content Add an app. We're looking for something that has a picture of a person on it, there we are, a Contacts folder.

If we want to see the details, you'll actually see that we can synchronize this with Microsoft Outlook. You want to commit to memory the fact that you can do that with calendar, tasks, and contacts. Because it makes them incredibly useful lists. And we're going to call this VIPs, and create it. We now have a new VIPs list. If it wasn't here in Recent, we could always go to Site Contents to find it. It would bring us right back here. And we can click, and go look. And we have the ability to add new items to this list. That's how easy it is to create a new list using the built in list apps in Microsoft SharePoint.