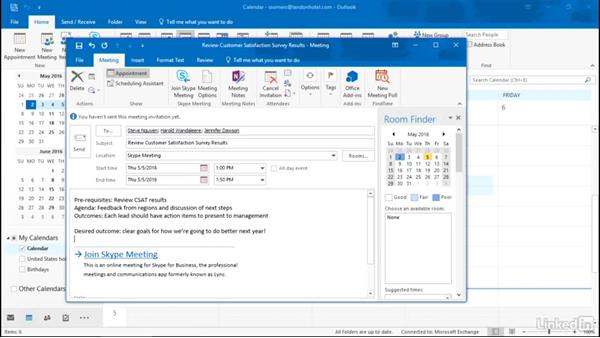 No one likes being stuck in a meeting that feels like a waste of time or is poorly run. Over time, many of us have become lazy about what it takes for meetings to be as efficient as they should be. This video tutorial will provide some practical guidance on ways to make your meetings productive and relevant for participants.

- [Voiceover] Over the years meetings have gotten a bad rap. We spend countless hours in meetings during any given week. In many instances we've become lazy about how they should be run. Meetings lack an agenda, they lack good decision making rules, people take their own notes, and there's no clear action on follow-up items. But meetings don't have to be frustrating, ineffective time wasters if we properly plan and make our meetings more meaningful. Let's review some of the elements of a successful meeting invite. I'm going to start by switching to my calendar here with the button on the lower left hand corner.

I'm going to look at my week, and figure out that the best time for me is probably on a Thursday afternoon to have this meeting. It looks like 1:00 PM is a good time, and I'll click on the New Meeting button in the upper left hand corner. The first thing I'm going to do is pick how long I want this meeting to be. I like my meetings to be about 50 minutes long. One, meetings tend to fit the time that you've given them, so if you have a meeting for two hours, the meeting will typically last two hours. If you make it a nice short meeting, you tend to get through the same amount of content in a shorter amount of time.

I also like to allow a little bit of time in between meetings so that people don't have meetings back-to-back all day long. One final thing is I like to include meeting times that are inclusive for everybody who is going to be a part of that meeting. You want to be sensitive to other time zones or people who may be dialing in from other countries. Next, I'm going to add the people who need to attend this meeting. I'm going to be sure to include a clear subject so everyone knows what the meeting is about. Another element is including where the meeting will occur. Since this is going to be a Skype meeting online, I'm going to click on the Skype meeting button in the toolbar.

Note that this will automatically insert the link from that meeting into the invite, so everybody knows where to go when the call occurs. Another element I like to include is a Great Agenda, we'll talk more about Great Agendas later in the course. One final element I like to include is Common Meeting Notes, using OneNote, the benefit of this is that everyone can co-collaborate on taking notes together, and then there's a clear artifact after the meeting of what occurred, even for people who may not have attended. To link those notes, I'm going to click on the Meeting Notes button which will open up an Attach Note in OneNote.

This option here allows me to either take notes on my own, but this isn't what I want to do, I want to share notes with everybody who's attending the meeting, so I'll select that option. I'm going to choose where I want to save this, this is going to go in the Sales Team Notebook, and I know it's going in the Customer Satisfaction area. You'll note that next to the Skype meeting invitation it also put View Meeting Notes, and that again, everyone will know where the notes for this meeting are taking place. Let's look at that connected OneNote, and see what elements are included there. Here are the Notes Links of that meeting we just set up.

You see the title of the meeting, you see the meeting date, where the location was. You can expand to see the elements in the meeting invite, which has the agenda. So you also see a list of all of the participants of the meeting, and this is great because you don't have to frantically write down everyone that's on the call, and it's also really useful if you have people who are outside your organization, because you don't have to ask them how to spell their name. I also sometimes will take notes and write down what people's role is right next to their name as we go through the meeting. So this is where everyone who's in the meeting can take notes, and because it's in a shared location everyone can take notes at the same time.

I also like to have another section where I can put Next Steps, and then we can assign those activities to people who are in the meeting, so if they're follow-ups then everybody will have that again in the same space. Now that we've made sure that the common notes are together I think we're ready to send out this invite. I'm just going to double check everything that I have the attendees that I wanted to attend, a clear subject, the time I want, a good agenda, it's ready to go. Make sure that the meetings you send out are relevant and productive for everyone who attends by including a clear overview of the purpose of the meeting, and by preparing the tools that support the meeting.

Meetings can be one of the more effective and powerful collaboration spaces, so try a crisp and purposeful approach. 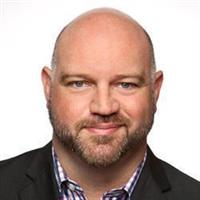 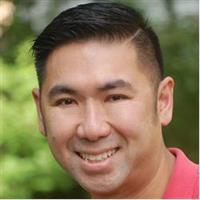 7/14/2016
Steve Somers and Steve Nguyen are Microsoft evangelists who coach top companies on using Office and David Allen's popular Getting Things Done® framework to be more productive. With these tips, and the flexibility and freedom of Office 365, you can get more done at work—anywhere, anytime. First, get a quick overview of the GTD® tenets and the applicable communication and collaboration tools in Office 365. Then explore how to plan for productivity as well as take notes, capture ideas, and effectively manage tasks using Office 365 tools.

Next, learn which methods—email, phone, Skype, or face-to-face discussions—are most effective for communicating, and explore how to best plan and run effective meetings. By the end of the course, you'll be able to build a personal productivity strategy that works for you and your team.

Getting Things Done® is a registered trademark of the David Allen Company.
Topics include: