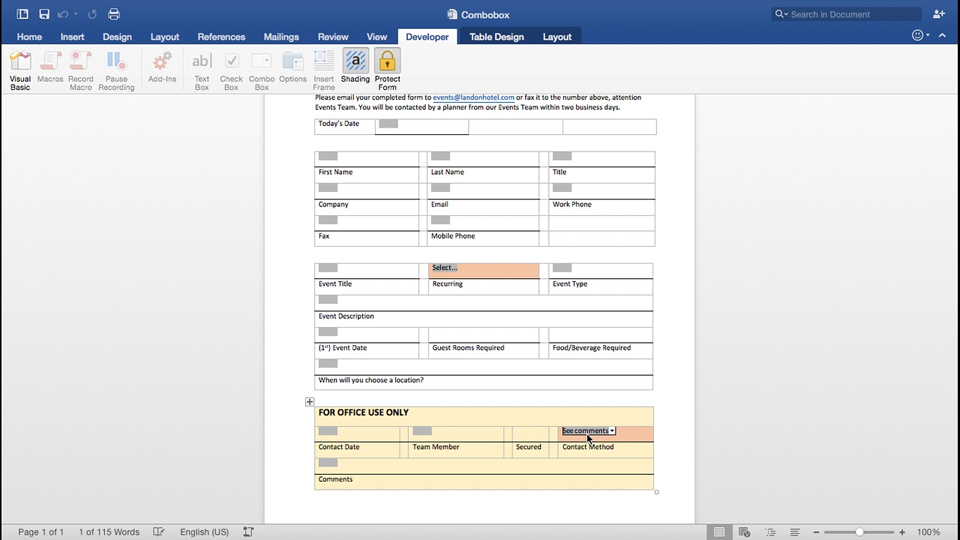 - This document called Combobox has all of the text box controls already placed. And I shaded in the two places where we're going to add combo boxes. First, recurring, and then second contact method. Again, based on your design, you may have more or fewer combo boxes. We have the two. I'm going to click in recurring, click on my Developer tab, and choose Combo Box. And then I can either double-click the combo box or I can click Options. To be able to add items to the drop-down menu in this combo box.

Under recurrence, the first possibility is that this even doesn't recur at all. It only actually happens once. And if that's the case, I could say recurrence is non but that seems a little technical. What most people would describe that as a one-time event, which means there's no recurrence. Click plus to add that item to our drop-down list. Now, if the item does recur then, there're a lot of patterns that are established for how things recur. I'm going to list them now chronologically. An item may occur weekly, when I press Return, is automatically added to the list because the Drop-down item text box here in the form, actually is enabled.

So when I press Enter it knows to drop it into the list. So, I don't have to click on anything. All I have to do is type and press Return. So the next possibility is, biweekly and semimonthly tend to confuse people, the bi specially. So if I wanted to do semimonthly I could, but, we might just say twice a month. Monthly, quarterly, annually. Now, I might have more choices than this, a list that has many, many things to choose from, either should be very predictable, like a list in 50 states in alphabetical order.

Or a list that is so well-ordered in your organization that it makes perfect sense to people. Shorter lists are better. Longer lists are more difficult and lead to people making wrong choices too many times. If I want to rearrange items from the list, for example, if I wanted to make this in alphabetical order, I wouldn't, but I could click annually and use the move up button to move it up. If I keep moving it up, it goes to the bottom of the list and then circles around again and it's back where it was. This is called Dropdown1. I'm going to rename this to Recurring, or recurrence, just say Recurring.

And click, okay. And notice it says one time event, which is the first item on the list. Now, how this will actually work when the form is being used. Is the form will be protected. Notice the drop down arrow. So we've made one time event that default by placing it first. If the user chooses something else, then something else is placed there. Another possibility in the way that you'll see combo boxes or list boxes created sometimes is that the very first item says Select. And we add that and we put it up at the top.

Now, when we protect the form, notice it says Select, and then I'm forced to choose something, and then I can also tell when I haven't selected anything. This is a preferred method unless that first item A is the default, and B is used most of the time. This makes it clear when a user hasn't selected anything. Whereas, a default of one-time event doesn't necessarily provide that clarity. I'm going to un protect the form and we'll be talking more about form protection later.

But for now, while you're designing your form, know that if you want to see how the form is going to operate when it's really being used, you click Protect Form to protect it so you can see that. I'm going to quickly now create the contact method combo box, just so we've done a couple of them. Here are my options. The first possibility is that the contact was made by Email. Second possibility is Fax. Third possibility is In person. And the fourth is Phone. There's also a possibility that non of those are true and we're going to say See comments.

And, again, we might want to choose Select... Enter it, it's at the end. If I send it down, it will appear at the top of the list. Rather than having to go up, up, up. That's a good thing to know. And this is our ContactMethod. So why did I include See comments, because one possibility is that the person wasn't contacted. That the phone had been disconnected. Another possibility is that they were contacted a couple of different ways. Perhaps even by different members of our team. If I want to see how this is going to behave, protect the form, select In person, for example.

Notice that when I select something longer, that this combo box control actually expands to accommodate the text that I have chosen. These are the only two combo boxes that this particular form uses. Feel free to save your form if you wish. I'll see you in the next movie.

2/1/2016
Learn how to create electronic forms that are visually pleasing and easy to navigate with Word for Mac 2016. This course covers designing a form; capturing data effectively with form controls such as dropdown lists, date pickers, and check boxes; and testing, protecting, and distributing forms. Gini Courter also shows how to accelerate form creation with free Microsoft.com templates and customize and share templates with colleagues.
Topics include: