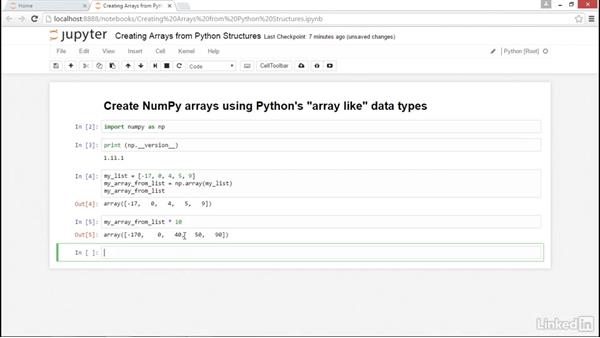 Learn to create NumPy arrays from lists or tuples in this video tutorial by Charles Kelly. These are explained in the context of computer science and data science to technologists and students in preparation for machine learning, applied statistics, neura

- [Narrator] File Open when you're creating arrays from Python Structures File, by clicking on its file name. This will open a new tab in your browser. Your basic data structure with a NumPy is an array. In this video, we'll learn several methods for creating arrays. We'll begin by using a convention that is common among NumPy users. We'll re-name the NumPy name space to NT. This will permit us to pre-fix NumPy functions and methods and attributes, with NP, instead of typing n-u-n-p-y.

To do this, we'll type "import numpy as np." We'll execute this cell by pressing Shift and Enter. If you don't receive an error message, then you'll know that NumPy was imported correctly. There are situations where it's important, that you know which version of NumPy you are using. This is easy to accomplish. You can begin with Python's Print function, and you can access NumPy's Version attribute by typing np, since we re-named the name space from NumPy to np.

In order to create a NumPy array, from a Python data structure, we use NumPy's array function. We can access this by typing "np.array" and give the name of our data structure as a parameter to the array function. Finally, we can display the contents of this array, by using the Notebook feature, typing "my", pressing the Tab key, and selecting among the choices.

Now I'm going to press Shift Enter, and we'll see the contents of our array. This tells us that, in contrast to Python's list, we now have a NumPy array with the same elements that were contained in the list that we created in Python. The first thing that we can do with any NumPy array is perform parenthetic operations. These operations are performed element by element. For example, if I want to multiply every element in the list by ten, I can simply type the name of the NumPy array, the operator, in this case multiplication, the multiplicand, which is ten, and the results are, not surprisingly, 170, zero, 40, 50, and 90.

In the next example, I'll create a NumPy array, from a Python tuple. In Python, to create a tuple, you use round brackets for parenthesis. In this case, our tuple has three elements. An integer, a floating point number, and a complex number. Again, I can use the NumPy array function, to create a NumPy array from this particular couple. If I type numpy.array, task my tuple, as a parameter to this function, I'll see the results.

Therefore, our original integer, floating point, and complex numbers, were all promoted to complex numbers. I'm going to create a header, that indicates the difference between Python data structures, and NumPy data structures. To do this, I'm going to create mark-down code. The easiest way to create mark-down code, is to use the Escape key, and the M key. This now indicates that this code will not be executed as Python, but will be executed as mark-down.

We'll start with three hashtags. Type the "difference between python an numpy and data structures." The important difference is the way that tuples and arrays are promoted, and then used in mathematical operations. For example, if I type "my tuple," and I use an asterisk, and I execute this code, you'll see that what happens, is the tuple, in this case a Python tuple, was replicated six times.

The point to remember, is that the operator and its impact will vary, depending upon the type of data structure that you're using. This is an example of object-oriented design, within both NumPy and Python. 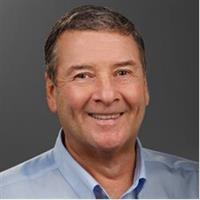 10/7/2016
NumPy Data Science Essential Training introduces the beginning to intermediate data scientist to NumPy, the Python library that supports numerical, scientific, and statistical programming, including machine learning. The library supports several aspects of data science, providing multidimensional array objects, derived objects (matrixes and masked arrays), and routines for math, logic, sorting, statistics, and random number generation. Here Charles Kelly shows how to work with NumPy and Python within Jupyter Notebook, a browser-based tool for creating interactive documents with live code, annotations, and even visualizations such as plots. Learn how to create NumPy arrays, use NumPy statements and snippets, and index, slice, iterate, and otherwise manipulate arrays. Plus, learn how to plot data and combine NumPy arrays with Python classes, and get examples of NumPy in action: solving linear equations, finding patterns, performing statistics, generating magic cubes, and more.
Topics include: