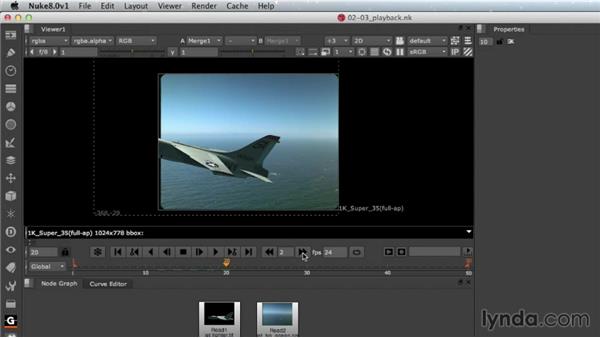 The timeline shows what frame of the shot you're working on and has many features to help manage large jobs. I'm using the same Nuke script here as in the previous video. You can click and drag the play head or just click on a spot and the play head will jump to it. Over here is the current frame number window, and it reports whatever frame the play head is on, but it has another useful feature. You can type in a play number, and the play head will jump to it. Now, that might seem a little bit trite until you work on a 1,500 frame shot, then you'll find it very difficult to drag the play head to the frame you want, but all you got to do is type it in and off you go.

Here's the frame increment window. Every time I click on the right arrows, it'll jump ten frames or back ten frames, but you can change that to anything you want, such as two. Now, it's going to jump two frames each. This can be very handy if you're rotoscoping on twos, for example. You can also set in and out points from the timeline. These little orange triangles here, this is the in point and over on this end, that's the out point. Position the play head in the middle of the range you want your in and out point. Move the cursor to the left of the play head and Cmd+click and the in point will jump to your cursor.

Move the cursor to the other side of the play head, Cmd+click, and the out point will jump to where your cursor is. You can also type the numbers in here if you wish. And if you want to turn it off, just click on this button here. And of course it will remember your in and out points, so you can turn them on and off as many times as you wish. You might have noticed the green line down here on the timeline. This is marking which frames have been cached. So right now this frame is cached, and if I single frame with the arrow key right arrow, I'm caching those frames. If I play, it's going to cache all of them.

If you'd like to clear the cache come up to the Cache drop-down menu on the Menu Bar and select Clear Playback Cache. The green line goes away and the cache is gone. Nuke's sophisticated timeline gives you a great deal of control over the playback of your shots, and is an important diagnostic as well. However, to find out where the first and last frame of the timeline is set, we'll have to look to the project settings in the next video.