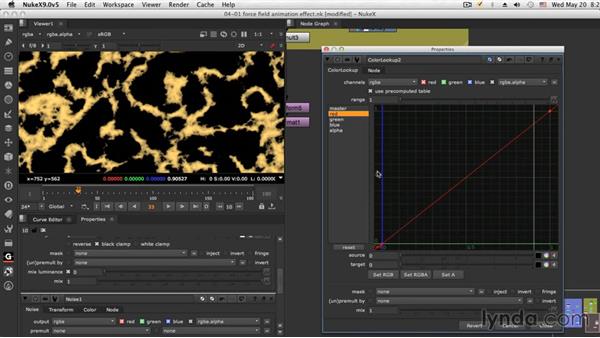 - So we've got our character keyed, position,…we've got our background working,…and it's ready now to put in the force field…animation effect.…Let's start by building the basic force field animation.…Right over here, there's a nice spot to work in right here.…We'll start by getting a reformat node…and use this to define the size of the noise patterns…we'll be using.…So let's open this guy up here…and set the reformat node for square 1K.…I'm choosing square 1K because that makes it the same size…as my comp, which means I'll have lots of fine detail…in my noise.…

Don't make it small and then try to scale it up.…So we'll close that.…So we'll go over to the Drawing tab and get ourselves…a noise node…and hook the viewer up to the noise node.…And scroll down.…The first thing we want to do is change the type of noise…from fractal Brownian motion to turbulence.…Next we'll change the size to 50.…

Now we'll lay in the animation, 'cause we want it…to churn and bubble with energy.…So let's jump the play head to frame one and set Z zero…