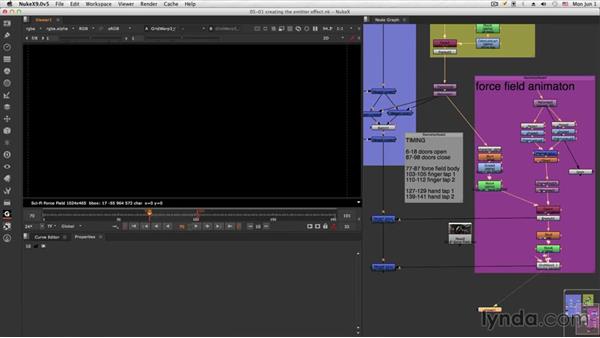 - [Voiceover] Hi, this is Steve Wright. Welcome to Visual Effects Techniques: Creating a Sci-Fi Force Field. While I'll be using Nuke to build this shot, you can use any compositing program with similar capabilities. In this course, we'll build this visual effects shot showing a space warrior stumbling into a force field. We'll see the entire process, from keying the green screen to the final sweetening of the comp. We'll start by seeing how take this static matte painting and give it life by animating the doors to open and close for the warrior to step through.

Next, we'll see how to key the green screen, do the spill suppression, and sweeten the alpha channel. The force field animation is created in Nuke, using the Noise node, plus a few nifty tricks to give it all an exciting look. We'll then see how to use the Noise node again to create one force field emitter animation. Then, copy and position it for all eight of them. To sell the composite, it's essential to add interactive lighting so that all of the elements appear to be together in the same light space.

After getting the entire shot set up, we go back and sweeten the green screen key and refine the look and feel of various parts of the shot, such as motion blur, for the doors. Please note that this course uses the Primatte Keyer and a variety of other Nuke nodes. This course is designed to show you how to build this shot using Nuke, not to teach Primatte or any of the nodes used. For that information, see my various Nuke courses here on Lynda.com. Now let's get started with Visual Effects Techniques: Creating a Sci-Fi Force Field.