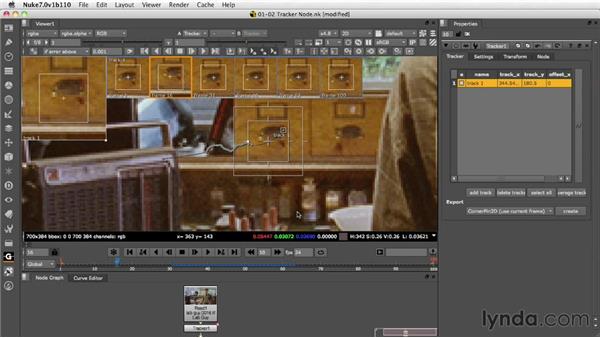 Join Steve Wright for an in-depth discussion in this video Using the new menu bar, part of Nuke 7 New Features.

Many of the buttons in the Tracker Property panel have been moved to the top…menu bar, plus it has several new features.…Let's check it out.…Okay, I need a little more screen space.…So, let's move this down, so we can get a good look at all of our Top Menu Bar Controls.…This first button here when it's red as you saw before, this adds tracks, click,…click, click, click, turn that off.…This is the pop-up menu for setting the rules for when to grab New Reference…Frame, this used to be on the Property panel, and this is the threshold for the…error that will trigger the new grab feature.…

This button forces the grab of a new pattern;…this of course is our familiar Track Forward and Track Backward buttons, which…are now the Auto Track Buttons.…This is the Key Track All button that we used earlier, and is the Key Track…Current button that we used just a moment ago to track between keyframes.…Re-track on Move Link is enabled by default.…Let's take a look at what that does.…If I have some track data here and if I were to come in and just move one…