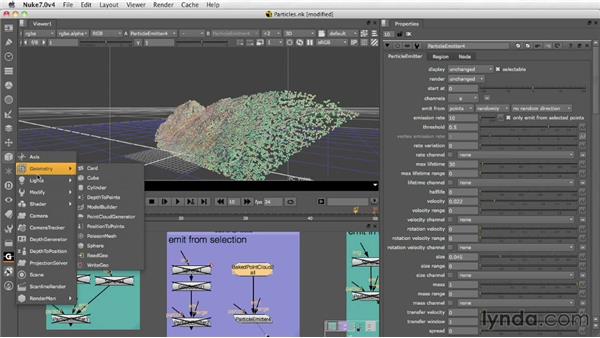 The big story for particles in Nuke 7 is about the ParticleEmitter node, it now…has several cool new emitter options, let's take a look.…First up the new bbox or bounding box emitter, previously your emissions were…limited to points, edges and faces.…Well, now we have the bbox option, let's see how that works.…Right now I have points selected, so I am getting particles emitted from just…the points of this cube.…If I set that to bbox, it now emits particles everywhere inside the bounding box…of the cube, in other words, in its interior.…

This is very cool for things like rain or snow, where in the past you had to…emit from a surface and do a lot of pre-roll in order to get the particles…filling the frame before you could even start rendering your shot. We'll stop this.…The bounding box it emits from has nothing to do with the shape of the geometry.…So I am going to go over here to this sphere, turn that on.…I am going to get rid of my cube, there, move out a little bit.…And now we'll take a look, let me orient this right along the Z-axis.…